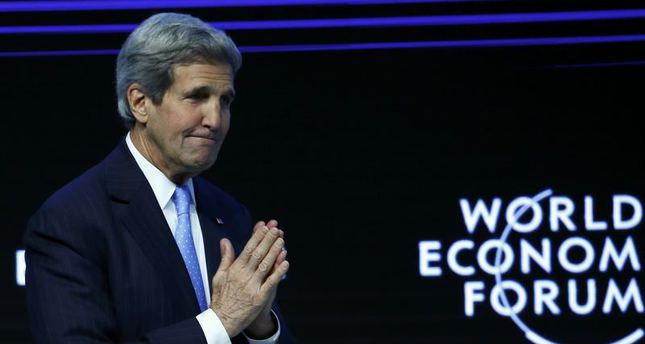 by Jan 23, 2015 12:00 am
U.S. Secretary of State John Kerry set out his vision for the fight against extremist violence on Friday in an impassioned speech in Davos where he also announced a visit to Nigeria.

Kerry spoke at length of the horrors inflicted by Boko Haram and al-Qaeda and promised a packed room at the World Economic Forum that the fight against terrorism would be unrelenting.

"This kind of atrocity can never be rationalised. It has to be opposed by every fibre of our being," he said.

But in the fight against "anarchy", "we have to also keep our heads", Kerry warned.

Discrimination and the sacrifice of values in the name of the fight against terrorism must be avoided, he said.

"We will certainly not defeat our foes by vilifying potential partners or by suppressing the very freedoms that terrorists try to destroy," Kerry said.

This year's instalment of the posh Davos talkfest has been marked by worries over the rise of bloody unrest, especially in the Middle East.

Earlier, French President Francois Hollande also delved into the consequences of extremism, only two weeks after attacks by gunmen in Paris killed 17 people.

Hollande urged his business audience to do everything they could to fight terrorism, saying the financial sector could help by cutting off funding
sources.

"You cannot have prosperity without security," the French leader said.

In his speech, Kerry listed a multitude of attacks perpetrated by extremists, including a December 17 attack on a school in Islamabad that killed 150 people, mostly children.

"This kind of atrocity can never be rationalised," he said.

Measuring every word, Kerry spoke of a Nigerian teenager who, strapped with explosives, decided in the final moment not to pull the tab, "saving herself and others".

Decisions like hers "ought to be an easy choice", Kerry said.

But he added: "We can't change minds without knowing what's in them. And we have to do so mindful of the fact that understanding and acceptance are not the same."

"We have to do more to avoid an endless cycle of violent extremism," he said.

Kerry called for intensified efforts to end violence in Nigeria, Somalia and other hotspots and announced a weekend visit to Nigeria.

After the speech, a spokesman for Kerry confirmed that he would be in Lagos on Sunday and meet President Goodluck Jonathan.

The Kerry visit takes place as Jonathan is seeking re-election. The vote is expected to be the tightest since Nigeria returned to civilian rule in 1999.

Earlier this month Kerry branded a Boko Haram massacre in northern Nigeria a "crime against humanity".

Boko Haram, which often targets civilians and kidnaps women, has seized dozens of towns and villages in the northeast in the last six months and now controls the border of Nigeria's Borno State with Niger, Chad and Cameroon.
Last Update: Jan 23, 2015 9:59 pm
RELATED TOPICS