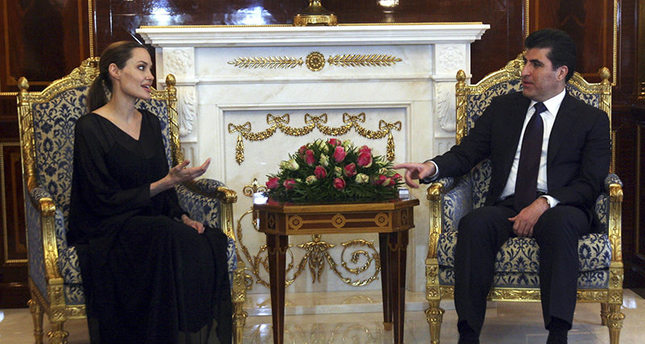 by Daily Sabah Jan 27, 2015 12:00 am
Actress Angelina Jolie, the special envoy for the United Nations Refugee Agency, UNHCR, travelled to the Kurdistan Region on Sunday to visit refugees in camps along the Syrian border and to discuss with Prime Minister Nechirvan Barzani the help provided by the Kurdistan Regional Government (KRG), according to a statement released on KRG's website.

Jolie arrived in Kurdistan on Sunday after meeting with Iraqi returnees from Syria and senior government officials in Baghdad. She met with some of the 21,000 Syrian refugees who have taken shelter in camps in Duhok province before travelling to Erbil to meet Prime Minister Barzani.

The duo reportedly met at the prime ministry office in Erbil and Jolie extended her appreciation to Barzani for the assistance the government is providing refugees suffering from the dire consequences of war. Deeming what the Iraqi and Syrian refugees go through as a huge disaster Jolie repeated her call for help from the international community to avoid further deterioration of the situation.

In response, Barzani noted that Jolie's visit to the refugees was a source of morale for them and asked Jolie to convey the real picture of Kurdistan region to the international public and charities.

Barzani also said: "We have not received any support from Baghdad, but of course this has not caused us to delay our aid. Instead of waiting for the support of the Federal Government, we have provided immediate assistance to those who have sought shelter with us."

The American actress was appointed a Special Envoy by the UN High Commissioner for Refugees in 2012.

According to the UNHCR, Jolie has conducted "more than 40 field visits around the world, becoming well-versed in the phenomenon of forced displacement and a tireless advocate on their behalf."