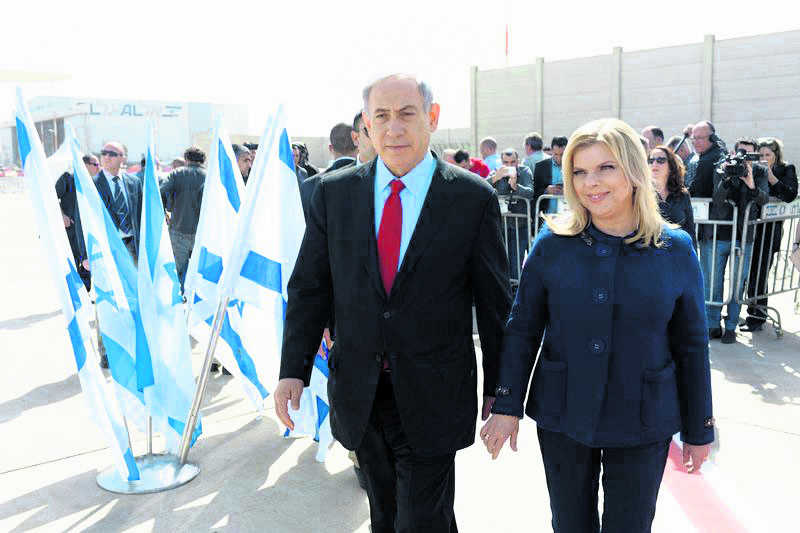 by Anadolu Agency Mar 02, 2015 12:00 am
U.S.-Israeli relations are at their lowest point in decades as Israeli Prime Minister Benjamin Netanyahu prepares to deliver a controversial address to what is shaping up to be an incomplete joint session of Congress Tuesday. The opening salvo in the row was fired in January when House Speaker John Boehner invited Netanyahu to address a joint session of Congress without consulting the White House, a move the administration quickly lashed out at as a breach of protocol. "The way in which the invitation played out, the timing and the manner in which it was delivered, certainly injected a level of partisanship into the United States-Israel relationship that really hasn't existed before," said Douglas Farrar, an associate with the Aspen Institute's congressional program. The war of words, and indeed snubs, quickly ramped up following the invite.

U.S. President Barack Obama and Secretary of State John Kerry have said that they would not meet with the Israeli leader while he is in Washington, citing the trip's proximity to Israel's March 17 elections. And Vice President Joe Biden, who as the president of the senate would normally be present at a joint session of Congress, is expected to be on foreign travel to Latin America. In Congress, at least 35 Democrats, five senators and 30 House representatives -- have so far said they will skip the speech. "This is the lowest point in U.S.-Israeli relations since at least 1991," National Iranian American Council President Trita Parsi told The Anadolu Agency, referring to then-President George H. W. Bush who tried to link U.S. aid to Israel with its settlement policies in the Palestinian territories. That's a critical change to an issue that has long unified an unyieldingly divided Congress, and a rebuff to a prime minister who once said "America is a thing you can move very easily." "It has created a wedge where there wasn't one," added Parsi. And indeed, National Security Advisor Susan Rice said last Tuesday that the recently created partisanship is "destructive of the fabric of the relationship" between Israel and the U.S.

Daniel Serwer, a professor at Johns Hopkins School of Advanced International Studies and scholar at the Middle East Institute said the way the invite played out was "inappropriate behavior" from Boehner and Netanyahu. "Netanyahu knew it, and he figured he could embarrass the President of the United States, and he wanted to embarrass the President of the United States and show himself to be a strong defender of Israel's security," he said. Netanyahu is largely expected to rally opposition to a nuclear deal with Iran during his address, and call for Congress to pass new sanctions on Iran, a move the Obama administration has strongly opposed saying it would likely derail talks and weaken international support for existing sanctions. The prime minister has been an outspoken critic of negotiations between the P5+1 group of world powers, the U.S., China, France, UK and Russia, plus Germany, and Iran concerning its nuclear program. He said last Wednesday that world powers have "given up" on trying to stop Iran from attaining a nuclear weapon. "From the agreement that is forming it appears that they (world powers) have given up on that commitment and are accepting that Iran will gradually, within a few years, develop capabilities to produce material for many nuclear weapons," he said during a meeting of his Likud Party. "They might accept this but I am not willing to accept this." Iran has long maintained its nuclear program is for purely civilian reasons.

With national elections in Israel just two weeks out, Netanyahu is seeking to develop as much political support as possible, in part using Iran to paint himself as a bulwark of Israeli security. But he may have overreached with his political maneuvering in Washington, embittering relations with a key ally. "What's happened is that something that he thought would be an electoral plus has in practice become a minus," said Serwer who added, "We'll see if that's the way it's taken in Israel." In yet another official rebuke of the Israeli leader, Kerry harshly criticized Netanyahu last Wednesday, saying the prime minister was "wrong" about an interim agreement that has been in place since January 2014. "Here you have a dysfunctional policy interaction. You've got a dysfunctional personality interaction. And it's really taking its toll," Aaron David Miller, distinguished scholar and vice president for new initiatives at the Wilson Center, said during a CNN interview last Thursday. And with Israel's elections two weeks away, a change to the country's political scene may be a necessary step to remedy the dysfunction, according to Parsi. "If you take Netanyahu out of the picture right now you would have the ingredients there to be able to start a process of solving some of their tensions," he said. "But his presence makes it very, very difficult because he's past the point of no return, he's really challenging Obama in a way that no Israeli Prime Minister has done in the past."
Last Update: Mar 02, 2015 10:26 pm
RELATED TOPICS