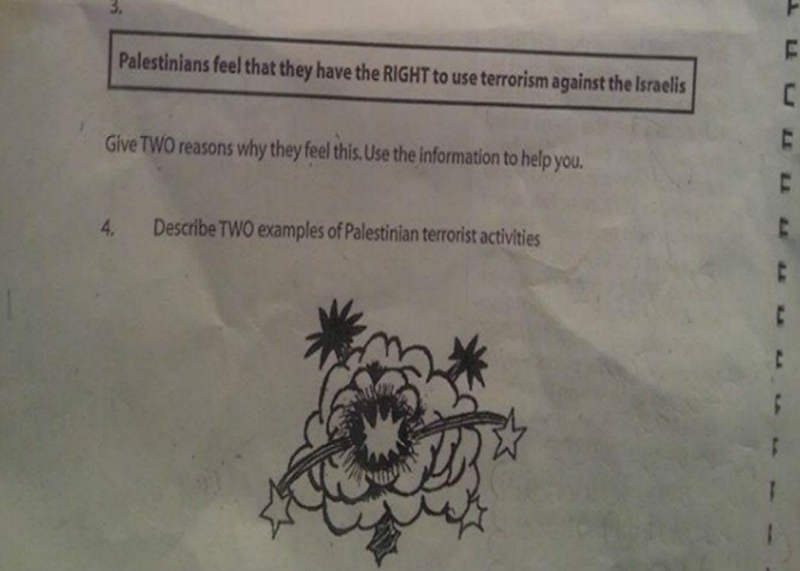 by Daily Sabah Mar 05, 2015 12:00 am
A primary school in North Lanarkshire, Scotland, has apologised after receiving angry complaints about a homework sheet given to 11-year old pupils which described Palestinians as "terrorists."

The handout, given to the children at New Stevenston Primary School, stated "Palestinians feel they have the RIGHT to use terrorism against Israelis." It then asks the pupils to "describe two examples of Palestinian terrorist activities."

In the accompanying information pupils are told that: "Palestinians have turned to terrorist methods for over 30 years as they were always defeated."

According to the BBC, Aliyah Shafiq, who posted the image of the homework sheet on Facebook, wrote: "How is my little sister being made to answer questions like this for her homework?"

She added that even though the homework was given to New Stevenston Primary pupils, the actual sheet is from the council and not the school or any teacher directly.

An additional 'explanatory' sheet given to the children says: "Palestinians who live in Israel believe that it is THEIR land which is being occupied by the Israelis." The worksheet also included questions asking children to name terrorist groups in Northern Ireland.
Issam Hijawi, chair of the Association of Palestinians Communities in Scotland, said he was "shocked" by the questions and could not believe that they were being given to 11-year-old pupils.

He said: "We are calling for this to be withdrawn immediately and we want to have a meeting with the education department at North Lanarkshire Council to discuss how this situation arose.

"The questions are not only biased but they are contradicting the legal framework of the Palestinian cause."

After receiving a number of complaints after a photo of the worksheet began circulating on social media on Wednesday, North Lanarkshire Council, which produced the worksheet, said it would ensure that it would no longer be used, adding, "The description of Palestinian people is entirely inappropriate and we apologise unreservedly for the offence caused."
Last Update: Mar 05, 2015 2:44 pm
RELATED TOPICS