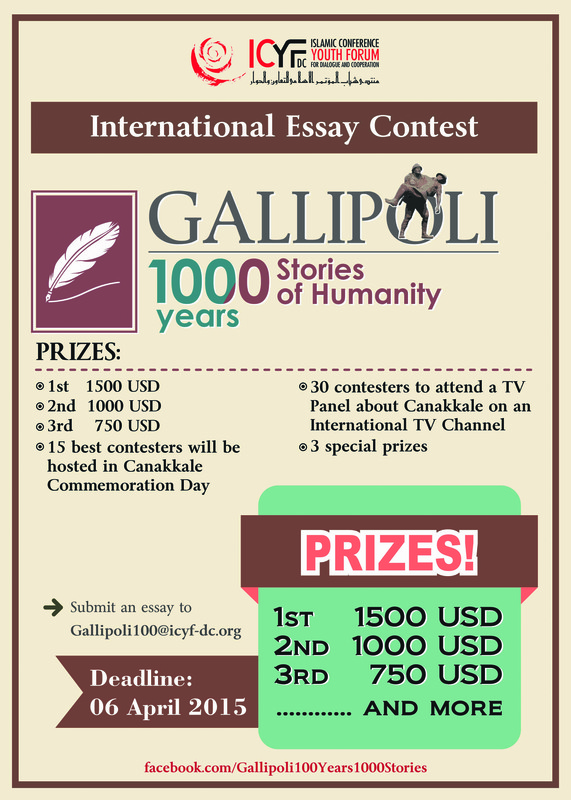 by Miraç Tapan Mar 09, 2015 12:00 am
The Islamic Conference Youth Forum for Dialogue and Cooperation, which is affiliated with the Organisation of Islamic Cooperation (OIC), is organizing an international essay competition to mark the 100th anniversary of the Battle of Gallipoli. The countries involved in the campaign each have different perspectives on the deeds of their soldiers, although the desire to remember and commemorate their service and sacrifice are of utmost importance. With the Battle of Gallipoli, the world once again witnessed that war is not only about victory or defeat, but also about the soldiers who fought and died while serving their country. The common memory of the Gallipoli Campaign can bring light to the present day in terms of friendship and harmony, and enhance the resolve to channel the common international effort to strive for peace rather than war.

The essay competition invites youth between the ages of 16 and 35 to submit an essay in English focusing on the question "What is the message of the Battle of Gallipoli in my world, 100 years after the event?" which should be at least 750 words. The essay submission deadline is April 6, and those who are interested can submit their essays online at: www.icyf-dc.org and www.facebook.com/Gallipoli100Years1000Stories. The competition will come to an end with a special ceremony, which will be held on April 24 in Çanakkale, Turkey, after an international jury selects 15 winning essays. The Battle of Gallipoli, which took place in 1915, was a large-scale war maneuver employed by the British and French that aimed at capturing Istanbul, the Ottoman Empire's capital city. The campaign that took place in the remote part of the Gallipoli Peninsula, in present day Turkey, commenced with a major, however unsuccessful, naval attack to penetrate the Dardanelles, the narrow strait that connects the Sea of Marmara to the Mediterranean Sea. The naval assault was followed with a land campaign on April 25, 1915, and the attack came to an end with the withdrawal of the last of the British and French troops without completing their main objectives. The Gallipoli Campaign lasted nine months and was fought by a million men from both sides, which led to half of them becoming war casualties by the end of the battle. The casualty estimates indicate the widespread nature of the conflict: 250,000 Ottoman troops, 120,000 British and Indian troops, 47,000 French troops, which also includes troops from its African territories, 27,700 Australians and 7,600 New Zealanders. The pain and suffering experienced and the loss of mainly young men had a profound impact on many generations to come.

However, the Battle of Gallipoli did not end the hostilities between nations, as the British Empire continued the war in the Middle East from 1916 to 1918. When the war ended in 1918, the Ottoman Empire, along with its allies, lost the war along with many of its territories, which led to the creation of many nations in its place. One of these new nations, the Republic of Turkey, was founded by the legendary commander of the Battle of Gallipoli, Mustafa Kemal Atatürk. He unified the country after the three-year War of Independence against the invading forces. Today, Turkey follows the Atatürk maxim "Peace at Home, Peace in the World," and maintains good and friendly relationships with other countries. The Battle of Gallipoli might have had a huge impact on many nations, however, it became a benchmark for Turkey, Australia and New Zealand especially. Over the decades, the three countries have developed an admirable friendship, and continue to showcase their unique bond that grew out of a tragedy of a war on the 100th year anniversary of the battle.
Last Update: Mar 09, 2015 1:09 am
RELATED TOPICS