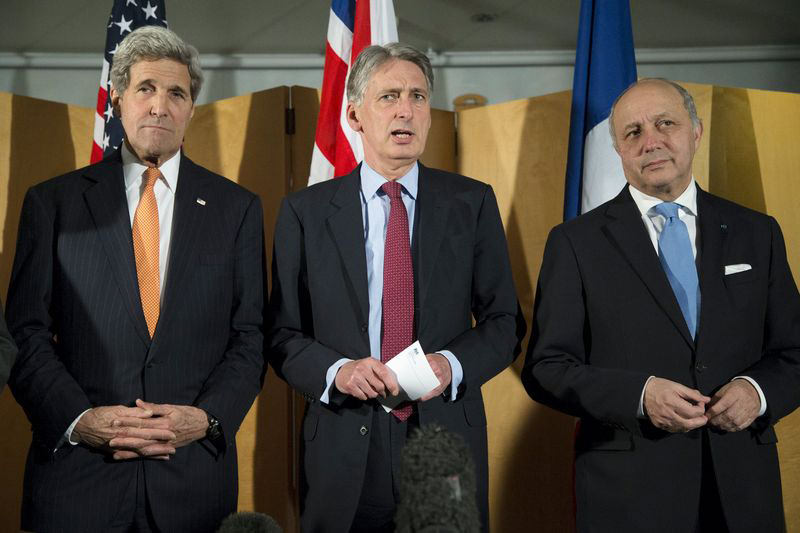 | Photo: Reuters
by Mar 21, 2015 12:00 am
British Foreign Secretary Philip Hammond met his counterparts from US, France and Germany on Saturday and affirmed their "unity of purpose" in the Iran nuclear talks.

The ministers noted "substantial progrss" in the discussions with Tehran, which are due to resume next week, but said there was still no agreement on some "important issues".

"We will all continue to work together with unity of purpose," read a joint statement following the talks in London, adding: "Now is the time for Iran, in particular, to take difficult decisions".

Iran and six world powers are in negotiations to clinch a landmark deal that would have the country scale back its controversial nuclear programme in return for relief from sanctions.

In Tehran, President Hassan Rouhani struck an upbeat tone saying that "an agreement is possible".

"There is nothing that cannot be resolved," the official IRNA news agency quoted him as saying.

The foreign ministers' gathering in London comes a day after the latest talks between Iran and the so-called P5+1 group -- Britain, China, France, Russia and the United States plus Germany -- ended without a breakthrough.

"Any solution must be comprehensive, durable and verifiable. None of our countries can subscribe to a deal that does not meet these terms," they said.

The complex deal on the table, due to be finalised by July, is aimed at convincing the world that Iran will not build nuclear weapons under the guise of its ongoing civilian energy programme.

In exchange, Iran, which denies wanting nuclear weapons ,would get relief from the mountain of painful sanctions that have strangled its oil exports and hammered its economy.
Last Update: Mar 22, 2015 9:49 am
RELATED TOPICS