Earth Hour marked throughout the globe 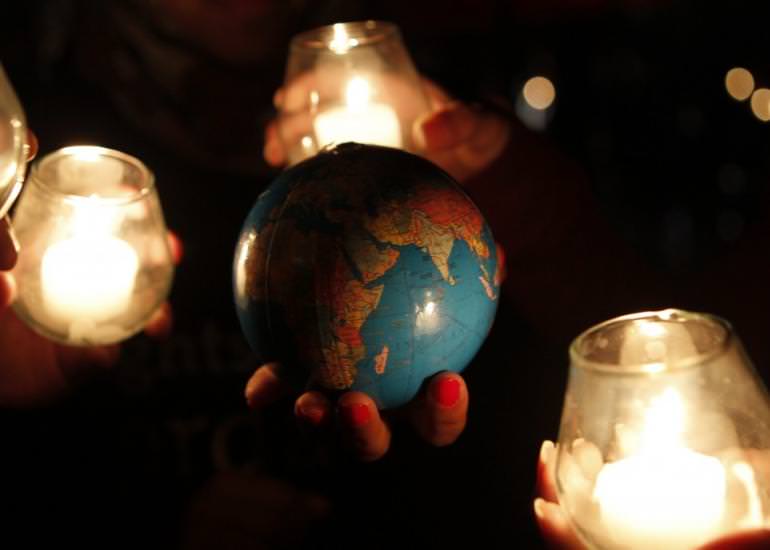 The Eiffel Tower went black for only five minutes -- due to security reasons -- while nearly 300 other monuments in the City of Light also switched off their lights.

This year's event comes as the French capital will be hosting a crucial UN climate conference in December that will bring together the international community to discuss efforts to limit global warming.

Millions of people around the world were taking part in the annual Earth Hour organised by conservation group WWF, with a string of well-known sights plunging into darkness.

In Berlin, activists at the unlit Brandenburg Gate placed candles in paper bags that were lined up to spell out "Save our Climate! Now!", while the Kremlin in Moscow also shed its evening diamonds.

"It's almost like the thing vanished," said Tony Jennings from Earth Hour after standing under the Sydney Harbour Bridge as the lights went off at 8:30 pm (0930 GMT).

In Australia, the initiative this year is focusing on farming, with fears that rising temperatures could ultimately damage the country's ability to produce food.

"In Australia agriculture is the most vulnerable industry to the impacts of climate change," said national Earth Hour manager for Australia, Anna Rose.

Hong Kong's signature high-rise skyline along the Victoria Harbour was a shadow of itself, with its towering skyscrapers standing dark -- among them were the city's tallest building, the 118-story International Commerce Centre.

In Taiwan the lights went off on the Taipei 101 tower, the world's tallest building before it was overtaken by Dubai's Burj Khalifa, while in Kuala Lumpur the usually dazzling Petronas Twin Towers were dark.

In neighbouring Singapore all Earth Hour events were cancelled because of the mourning mood following the death of the city-state's founding prime minister Lee Kuan Yew.

Earth Hour takes place from 8:30 pm local time and encourages citizens, communities, businesses and organisations to switch the lights off for an hour to highlight the plight of the planet.

The initiative began in Sydney in 2007 but quickly went global.

"Over 170 countries and territories have already confirmed their participation; more than 1,200 landmarks and close to 40 UNESCO world heritage sites," Earth Hour head Sudhanshu Sarronwala told AFP ahead of the event.

This year will include a glow-in-the-dark Zumba party in the Philippines, a coordinated candlelit dinner in Finland billed as the world's largest, and restaurant dinners by candlelight in London, said WWF.

Earth Hour's goal is not to achieve measurable electricity savings but to raise awareness of the need for sustainable energy use, and this year also to demand action to halt planet-harming climate change.