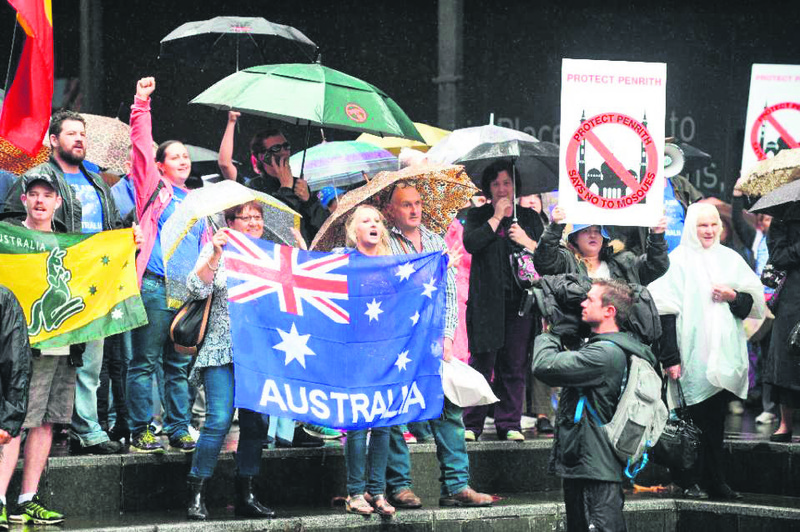 PEGIDA, despite losing its popularity, held rallies in different countries.
by Daily Sabah with AA Apr 06, 2015 12:00 am

Amid sharp criticism, anti-Islam protests continue to be held in many countries from the U.K. to Australia in the pretext of the terror attacks by militant groups like ISIS, al-Qaida and Boko Haram

With a sign of growing anti-Islam movement in many countries, the London branch of PEGIDA held its first session in front of the prime minister's residence on Saturday with little participation to the anti-Islam rally. Saturday's march was held in order to promote anti-Muslim rhetoric and sentiments in the country. However, the anti-PEGIDA organizations staged rallies to protest the far-right movement. "We see PEGIDA UK as one manifestation of the unease in society caused by state divide and rule tactics, the stirring up racial and religious hatred in the media and the decline in living standards," anti-racism organizations called London Anti-Fascists (AFN), and Unite Against Fascism (UAF) stated.

The United Kingdom has seen a growing trend of far-right political parties and groups. Increasing concern over the burgeoning number of immigrants living in the country has led to an increase in votes for the anti-EU and the anti-immigration U.K. Independence Party (UKIP) over the past year. Border control and security are at the heart of its electoral campaigns as recent opinion polls show that there is a steady increase in support for UKIP. The English Defense League (EDL) is a far-right anti-Muslim organization based in Britain that said the following in an online statement of its Memorandum of Understanding: "Individual Muslims may well have plenty to offer, but there is much about Islamic culture that we cannot stay silent about. We are committed to countering extremism, wherever it is found, and we will guard against anything that would threaten our diverse and tolerant nations."

In Australia, anti-Islam rallies took place on Saturday as well, promoting hatred towards Muslim community residing in the country. Marchers draped in the Australia flag carried signs screaming anti-Islam messages such as "Sharia Law equals Pedophilia," and "God Save Us" in Sydney, while in Perth a line of mounted police and other officers, some with dogs, kept opposing sides apart. Counter-protesters argue the movement is anti-Muslim and Islamophobic, while Clare Fester, who organized a counter-rally in Sydney, told The Anadolu Agency that Reclaim is just "racist and divisive."

Misrepresentation of Islam by militant groups like Islamic State and al-Sham (ISIS), al-Qaida, Boko Haram and the Taliban trigger more hatred and anti-Muslim sentiments among Western countries. As these militant groups have carried out violent attacks and killed many people, people in Europe are more inclined to act violently against Muslims and immigrants while supporting far-right political parties.

PEGIDA has spread across Europe and gained worldwide recognition, as a movement acting against Islamization of the West. The far-right populist movement was founded in Dresden, Germany in October 2014. Right after its establishment, it has grown much larger with support growing from disenchanted Europeans who oppose the "Islamization" of their country. The protests spread to small countries like Denmark and large ones like the U.K. and Spain as the presence of a significant number of Muslims has likely fuelled a resurgence in these countries.

Apart from Germany, anti-Islam demonstrations modeled on PEGIDA protests were held lately in Canada. However, the Quebec branch of PEGIDA failed to gain ground in the country as the group cancelled demonstrations due to low levels of participation amid sharp criticism. Canadian authorities condemned such anti-Islam movement while called to outlaw such rallies that threatens the country's tolerant and pluralist stance.
Last Update: Apr 06, 2015 2:14 am
RELATED TOPICS