400 migrants feared dead in attempt to reach Italy from Libya

A Red Cross volunteer carries a baby wrapped in a blanket after migrants disembarked at the Sicilian Porto Empedocle harbor, Italy (AP Photo)
by French Press Agency - AFP Apr 14, 2015 12:00 am
Up to 400 illegal migrants died after their vessel capsized off the Libyan coast on Sunday, said survivors who were brought to Italy, where tension is mounting over a surge in boat arrivals from North Africa.

The Italian coastguard on Monday said they had managed to rescue 144 of the people on the sunken vessel, while nine bodies were also recovered.

The International Organization for Migration and the charity Save the Children said between 144 and 150 survivors arrived at Reggio Calabria, on Italy's southern tip, on Tuesday morning.

"There were 400 victims in this shipwreck, which occurred 24 hours after (their vessel) left the Libyan coast," Save the Children said in a statement, citing survivors.

"There were several young males, probably minors, among the victims" and also children among those rescued, the international NGO said.

IOM spokesman in Italy Flavio Di Giacomo told AFP several of the survivors had told his organisation there were between 500 and 550 people on board when the ship sank.

"We are continuing to investigate in order to understand how the shipwreck happened," Di Giacomo said.

Initial investigations indicate the boat may have capsized after passengers started moving when they saw the Italian rescue team.
The latest tragedy came as Italian authorities said around 8,500 migrants had been rescued at sea between Friday and Monday, reigniting a debate in Italy about whether the country has a duty to house all new arrivals.

Recent good weather in the Mediterranean has prompted a spike in the number of migrants attempting to reach Italy aboard boats.
An increasingly violent and chaotic situation in Libya, a key jumping off point for migrants, has also helped prompt the hike in asylum seekers trying to make it to Europe.

Italian authorities say more than 15,000 migrants have arrived so far in 2015. There were 15,000 in April alone last year and an average of 25,000 each month between June and September.

Italy's interior ministry has ordered regional prefects to find emergency housing for 6,500 migrants -- a move condemned by the opposition, which argues the policy of rescuing immigrants encourages others to attempt the risky sea journey.

Matteo Salvini, head of the anti-immigrant Northern League, on Tuesday urged local officials not to cooperate.

"I ask the League's governors, mayors, assessors and councillors to say no, with every means, to every new arrival. The League is ready to occupy every hotel, hostel, school or barracks intended for the alleged refugees," Salvini said on Facebook.

With summer approaching -- and more than 500,000 people waiting to set out from Libya for Europe according to EU border agency Frontex -- aid groups are warning Rome is not prepared to deal with the next wave of arrivals.

Greece said Tuesday it was planning to set up reception centres on the mainland to deal with an influx of migrants arriving on its islands.
The decision at an emergency cabinet meeting chaired by Prime Minister Alexis Tsipras came after more than 700 migrants and refugees, mainly Syrians and Africans, arrived in Greece between Friday and Tuesday.

Meanwhile, Frontex on Tuesday said human traffickers had fired shots into the air to recover a vessel that had been used to transport migrants across the Mediterranean.

The incident happened on Monday when an Icelandic coastguard vessel was rescuing 250 people from a wooden boat some 60 nautical miles off Libya.

It was the second such incident this year after the Italian coastguard was confronted by armed traffickers in February, who ordered a boat be handed over once the rescue operation was complete.

People smuggling remains a lucrative business, with refugees and migrants rescued in the Mediterranean in February saying they paid $500-$1,000 for their crossing. 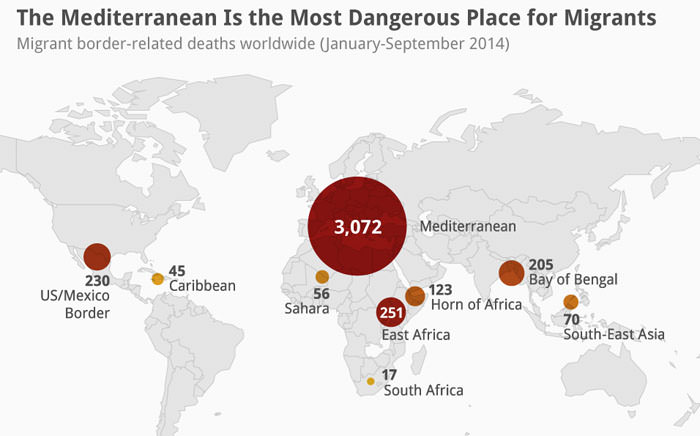