Russia to restore ties with Germany, no signal for US 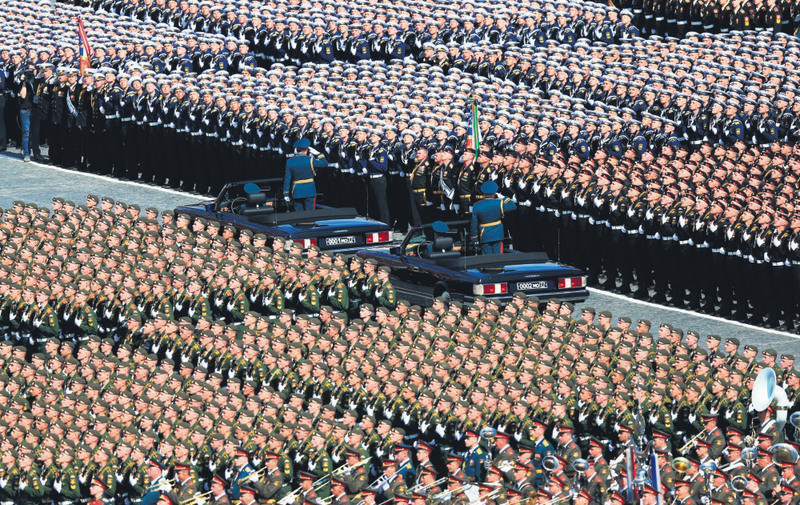 The Russian Army celebrated the 70th anniversary of victory against Nazi Germany in a show of strength amid tension with the U.S.
by Daily Sabah with Wires May 10, 2015 12:00 am

While accusing the U.S. of endangering international cooperation by creating ‘a unipolar world system,' Putin met with Merkel to restore cooperation that has deteriorated due to the Ukraine crisis

Following Russian President Vladimir Putin's tough stance on the United States, he met with German Chancellor Angela Merkel on Sunday to restore the already deteriorated relationship between the two countries. On Sunday Merkel paid tribute to Soviet soldiers killed in World War II as she called for cooperation with Russia amid tensions over Ukraine. Merkel flew to Moscow to lay a wreath at the Tomb of the Unknown Soldier near the Kremlin walls in an apparent compromise gesture after she skipped Russia's main Victory Day festivities on Saturday. Meeting Putin for talks at the Kremlin, she stressed the importance of cooperation.

"It's necessary for us to work, to cooperate including over complicated situations – the way the situation is now – and try to find diplomatic solutions," Merkel said at the start of the talks after the wreath-laying ceremony.

With a possible proxy war with Russia over the Ukrainian crisis, Putin launched a verbal attack during the Russian World War II Victory Day parade on Saturday, accusing the United States of "creat[ing] a unipolar world."

Russia on Saturday staged a huge parade to mark the 70th anniversary of victory over Nazi Germany, which most Western countries boycotted over Russia's annexation of Crimea and support for separatists in eastern Ukraine. Many are concerned that Putin is using the World War II Victory Day festivities to justify Russia's meddling in Ukraine and promote his nationalist-tinged agenda.

Both the West and Kiev assert that Russia has blatantly breached the principles of the founding act, disregarding Ukraine's sovereignty, independence and territorial integrity, signaling a more strained relationship between Russia and Western countries. Russian's assertive policies in the Ukraine crisis by amassing its troops on Ukraine's border and backing and financing rebels in eastern Ukraine has led to increased tensions that have deteriorated the bilateral relations between the West and Moscow since hostilities erupted last April. The Russian annexation of Crimea in late March 2014 and increasing signs of its involvement in eastern Ukraine have prompted worry among Western countries. Since unrest continues in Ukraine, EU leaders have imposed sanctions on Russia and threatened more in order to stop Russian aggression in Ukrainian territory.

The EU fears that harsh economic sanctions would likely hurt many countries' business links with Russia. Some of them, like Germany and Italy, are heavily reliant on Russian gas. The close economic ties between Russia and Slovakia have made trade and imports of Russian gas a priority over punishing the Kremlin. The ex-Soviet Baltic states consider Russia as a clear threat to their national security and territorial integrity. Considering Russian aggression, there has been a growing fear among eastern European countries that the Cold War years are returning. There is a common belief among northern European countries including Sweden, Finland, Latvia, Estonia and Lithuania that the Russian threat is imminent unless a stronger European security policy is built to stop Russian aggression.

Since clashes erupted in eastern Ukraine, more than 2 million Ukrainians have been forcibly displaced due to worsening humanitarian conditions in rebel-held areas where heavy fighting has turned eastern Ukraine into a battle zone. According to U.N. figures, more than 6,000 people have been killed in heavy clashes between armed groups since the hostilities erupted.
Last Update: May 11, 2015 11:01 am
RELATED TOPICS