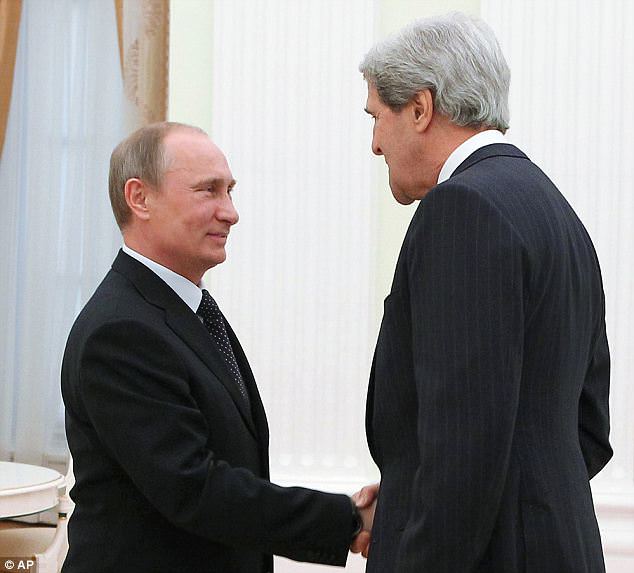 by Daily Sabah with Wires May 11, 2015 12:00 am
U.S. Secretary of State John Kerry will hold talks with Russian President Vladimir Putin and Minister of Foreign Affairs Sergey Lavrov on Tuesday in the Black Sea resort of Sochi. The two men will "discuss a full range of bilateral and regional issues, including Iran, Syria and Ukraine," U.S. State Department spokeswoman Marie Harf said on Monday. It will be his first trip to Russia since the start of the Ukrainian crisis, which has badly damaged relations between Moscow and the West. It his second visit to Russia as secretary of state.

Since the Ukrainian crisis erupted in February 2014, the U.S. and Russia have been consistently at odds. With a possible proxy war with the U.S. over the Ukrainian crisis, Putin launched a verbal attack during the Russian World War II Victory Day parade on Saturday, accusing the United States of "creat[ing] a unipolar world." Russia's increased militarization of the rebel-held areas in the Donbass region of eastern Ukraine and its explicit support of pro-Russian separatists seeking regional leadership close to Russia was criticized by the West and NATO, which warned that a full-scale war is at the border. Tension in the restive eastern part of Ukraine increased after the arrival of columns of Russian military reinforcements, which led to deterioration in the relations between the West and Russia.

NATO Secretary General Jens Stoltenberg warned on Monday that the situation in eastern Ukraine is headed "in the wrong direction" despite a cease-fire agreement reached in February. "We see more loss of life, a rise in cease-fire violations, obstruction of the monitors and continued Russian support for the separatists. This is a disturbing trend in the wrong direction," Stoltenberg told journalists in Brussels. NATO foreign ministers are due to discuss the situation in Ukraine later this week when they will meet in the Turkish city of Antalya. The talks will also touch on "the strategic implications of a more assertive Russia," Stoltenberg said.

Moscow has "a special responsibility" to ensure that the cease-fire deal is implemented, he added, expressing "great concern" that there has "over such a long time" been support for Ukrainian separatists and a Russian military build-up along the border. "In eastern Ukraine, Russia and the separatists have capacity, capabilities which enable them to launch new attacks with very little warning time," he said. "They have the capacity – what the intention is, I will not speculate on."
Last Update: May 11, 2015 6:43 pm
RELATED TOPICS