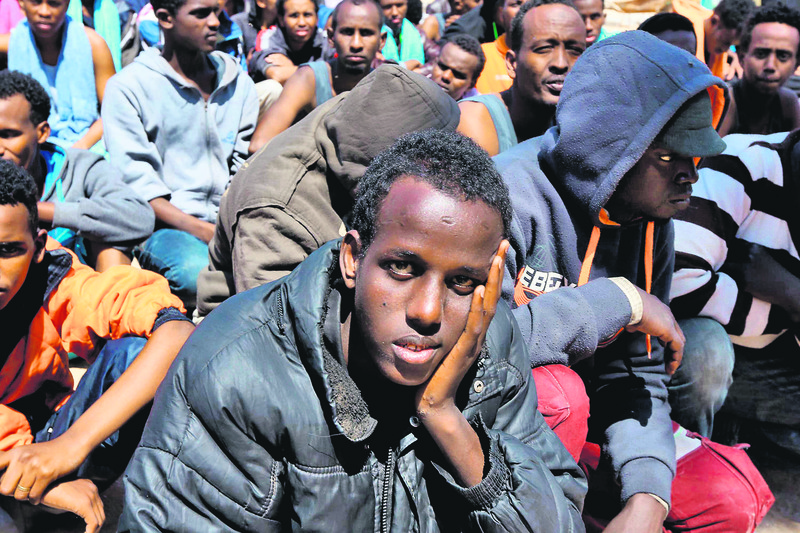 A migrant on a boat looks desperately as the European authorities are reluctant to receive them.
by Begüm Tunakan May 19, 2015 12:00 am

Whether the agreed EU naval force operation will be effective is contingent on sustainable cooperation within the EU, a positive response from Libyan authorities and the U.N. Security Council

As part of a comprehensive EU response to the Mediterranean migrant crisis, EU leaders have agreed to launch a naval operation named EUNAVFOR Med in order to disrupt human smugglers operating from Libya in the Mediterranean Sea. However, there are still some ruptures between EU countries, as Britain and France prefer using military force against human smugglers, while Germany prefers a more cautious stance toward the effectiveness of military action at sea. "We will have to deal with this problem for a long time, and the measures we adopt now will still take time," said Frank-Walter Steinmeier, Germany's foreign minister. After agreeing to the joint naval operation, the EU must obtain U.N. approval to establish a clear legal basis for any military operation. However, the U.N. does not consider a military operation a feasible option to end the tragedy in the Mediterranean. Russia, which has veto power as a permanent member of the U.N. Security Council, is strongly opposed to any military action. Also, the operation should be approved by the warring Libyan authorities before action can be taken in Libyan waters and ports. Neither of Libya's rival governments have yet shown willingness to cooperate with the naval plan, as both sides consider the EU's actions in Libyan waters a violation of territorial sovereignty. Libya's internationally recognized government in Tobruk opposes the EU naval plan, stating that "the military option to deal with the boats inside Libyan waters or outside is not considered humane."

The maritime operation commanded from Rome under the leadership of Italian Admiral Enrico Credendino aims primarily to protect European borders from the unprecedented influx of migrants attempting to reach the bloc's southern shores by paying smugglers to place them on overcrowded vessels and to prevent the loss of migrants' lives at sea. The joint costs of the naval operation are estimated at 11.82 million euros for an initial 12-month mandate, plus a two-month setup phase, according to the statement released by the European Council. The operation is expected to launch in June, depending on several factors, including the U.N. legal clearance, asset pledges and assessment of human smuggling and trafficking networks.

The Italian coastguards, Guardia Costiera, voiced their concerns over the EU's naval and military actions, saying that the EU naval operation should prioritize Mediterranean search-and-rescue activities rather than launching a military campaign, as reported by British newspaper the Guardian. "The problem of migration, of desperate people, will not be solved with these [military] measures. It will assume other forms. They will try to find other ways," Italian coastguard captain Paolo Cafaro said in an interview with the Guardian on Tuesday, while stressing the need "to stop all the involvement of criminal organizations in this traffic, all the money that they earn from this traffic, this must be destroyed. But the problem of migration cannot be solved with measures like these."

Meanwhile, Mediterranean Sea crossings continue to climb at an unprecedented level, hitting 38,690 since January 2015, according to the figures released by the International Organization for Migration (IOM). The number of migrants arriving in Italy by sea in the month of May reached to more than 12,460. In only three days, some 3,500 migrants reached Italian shores, the IOM said. "The majority of the operations are being carried out by the Italian Coast Guard and the Italian Navy," said Federico Soda, Director of the IOM Coordination Office for the Mediterranean in Rome. "A significant number of commercial ships were also involved in the operations, together with some Triton, British and German ships, and the MOAS/MSF ships Phoenix and Bourbon Argos."
Last Update: May 19, 2015 10:19 pm
RELATED TOPICS