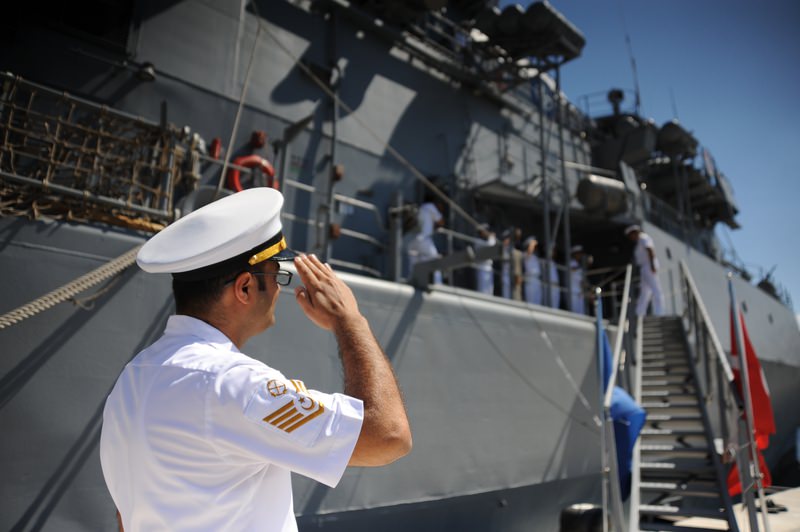 | AA Photo
by Daily Sabah with AA Jul 02, 2015 12:00 am
Turkey took over the command of Standing NATO Mine Countermeasures Group 2 (SNMCMG-2) from Italy at an official ceremony held at the Erdek naval base command in Balıkesir, northwest Turkey on Thursday.

Taking charge of the SNMCMG-2, Turkish Naval Forces' Staff Colonel Ramazan Kesgin stated that he had no doubt about the personnel's preparedness for the mission and added that they will complete the 1 year mission successfully.

The TCG Barbaros frigate will be the command and control ship, it was announced.

NATO Deputy Chief of Staff Operations, Commodore Arian Minderhoud, from the Royal Netherlands Navy, said that the mission group would continue to be the visible guarantee of NATO's collaboration, commitment and determination.

"We are taking the command of the mission group. Turkey will undertake it for a year. I will command the mission group. We are prepared well for this mission and will represent our country in the best way. We are ready for our duty to show NATO's power and determination in the seas," Kesgin said.

"The command and control ship will be TCG Barbaros. Another ship TCG Enez will be in the mission as well. We get contributions by other countries' ships too. Ships from Romania, Greece, Germany and Spain will join the group at certain times," he added.
The group guarding NATO ships from sea mines has been carrying out its activities since 1999.

Serving in international waters for a year, 'TCG Barbaros' ve 'TCG Enez' will provide the security of the NATO-watched Mediterranean, the Black Sea and the North Sea against mines.

The SNMCMG2 comprises eight mine hunters and a support ship from Belgium, Germany, Greece, Italy, Spain, Turkey, United Kingdom and the United States.