UNHCR chief: Responsibility must be shared on many shoulders in Europe 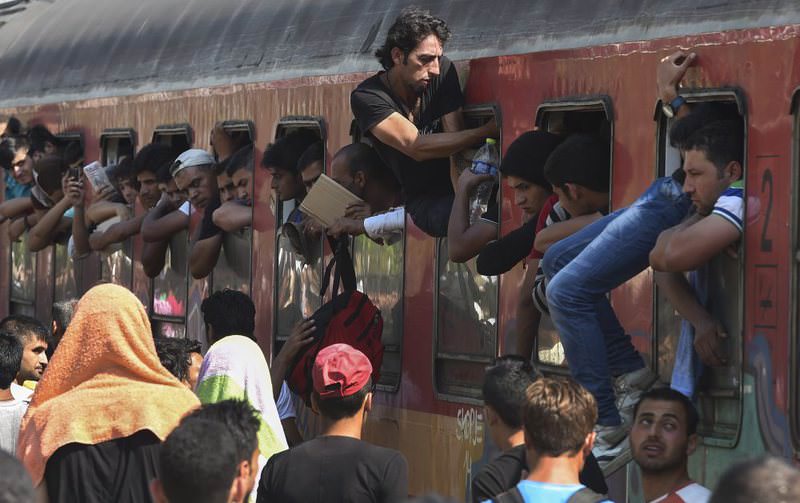 by Daily Sabah with Wires Aug 19, 2015 12:00 am
The U.N.'s refugee chief called on other European countries on Tuesday to share asylum burden in Europe, as German media reported that the number seeking refuge in the country could surge to 750,000 this year and Greece has been asking for help as migrant numbers surge.

In an interview with Die Welt newspaper, Antonio Guterres called for more solidarity among European countries in taking in those fleeing war and persecution. The responsibility must be "shared on many shoulders," U.N. High Commissioner for Refugees Guterres said. "All countries in Europe have the moral responsibility to welcome them and the clear legal obligation to protect them," said Guterres.

Germany, being Europe's top economy, has become the top destination for refugees. One in three who arrived last year in the EU sought asylum in Germany. Berlin had predicted the number of refugees would reach 500,000 this year, but the Handelsblatt newspaper on Tuesday quoted government sources saying this figure could rise to 750,000.

New official figures are due to be published on Wednesday, and if that projection is confirmed, it would be a record and far more than the previous high in 1992, when Germany opened its doors to refugees fleeing the Balkans wars. The sharp jump in numbers has left Germany scrambling to find ways to host the refugees, with tents and schools used as temporary housing. State authorities have been calling for greater federal aid to cope with the demand.

A record 60 million people around the world fled war, violence and persecution last year, according to U.N. data. German Chancellor Angela Merkel warned Sunday that the asylum crisis risks snowballing into a bigger challenge for Europe than Greece's debt woes. Greece has also now become one of the largest arrival points for refugees and migrants in the first six months of 2015, the International Organization for Migration (IOM) said last month. Struggling with a huge financial crisis, Greece recently said the country cannot handle migrants inflows. The conditions under which asylum seekers are suffering on Mediterranean islands and the lack of response to the crisis were criticized by the UNHCR director for Europe, Vincent Cochetel. "The level of suffering we

have seen on the islands is unbearable. People arrive thinking they are in the European Union. What we have seen was not anything acceptable in terms of standards of treatment," Cochetel said after visiting the Greek islands of Lesbos, Kos and Chios. "I have never seen a situation like that. This is the European Union and this is totally shameful," he added. Tsipras said the problem was a European issue and not just a Greek one. He said ministries would coordinate to help relieve the burden on distant islands and that a special unit would be set up to make use of dedicated EU funds to beef up border controls and integrate migrants into society. "The immigrant flow to Greece is beyond what our state infrastructure can handle," Tsipras said. "We have significant problems to face and that's why we have asked help from the EU."

The EU has sought to share the burden of the refugees across its member countries, but the response has been mixed. Last month, EU ministers could not agree on how to distribute all 40,000, mostly Syrian and Eritrean migrants from overstretched Italy and Greece. They agreed to start relocating a little over 32,000 migrants among the EU's 28 members

in October, falling around 8,000 short of the target agreed to by EU leaders at a summit in June. As the number of refugees fleeing the conflict in an attempt to seek security and shelter in more prosperous countries in Europe increases, xenophobic attacks and anti-immigration sentiment is also on the increase according to the recent reports.
RELATED TOPICS