Afghan officials asked for attack on Kunduz, US general says 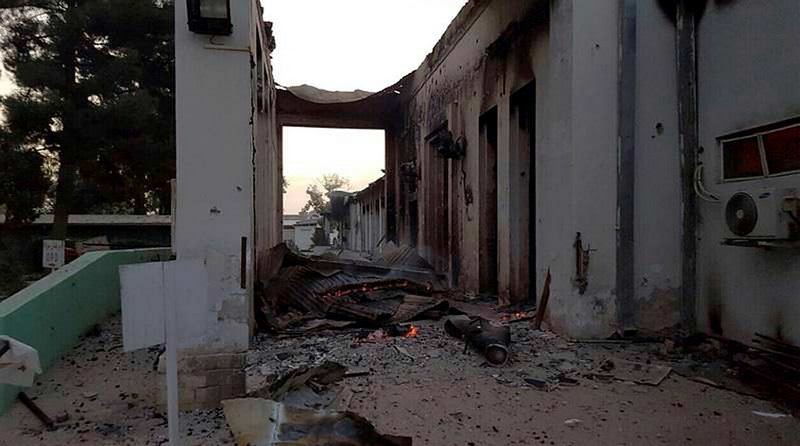 The hospital was partially destroyed as a result of deadly airstrikes which left at least 22 dead.
by Daily Sabah with Wires
Oct 07, 2015 12:00 am

After the deadly attack on a hospital in Afghanistan's Kunduz, U.S. military action has drawn harsh criticism and is under probe. A U.S. general said the operation was made after a request came from Afghan officials

Deadly U.S. airstrikes on a medical clinic in northern Afghanistan which killed at least 22 civilians were not requested by U.S forces but by Afghan troops after a Taliban attack, a top U.S. general said Monday. "We have now learned that on Oct. 3, Afghan forces advised that they were taking fire from enemy positions and asked for air support from U.S. forces," Gen. John Campbell said during a press conference at the Pentagon. "An airstrike was then called to eliminate the Taliban threat and several civilians were accidentally struck. This is different from the initial reports which indicated that U.S. forces were threatened and that the airstrike was called on their behalf," said Campbell, who said he wanted to correct an initial U.S. statement that the airstrikes were prompted by threats to U.S. forces. "If errors were committed we will acknowledge them," the commander said, adding his team would take steps to ensure that mistakes were not repeated.

The Taliban seized Kunduz last week but have since withdrawn from much of the city in the face of a government counterattack. Sporadic battles continue as troops attempt to clear remaining pockets of militants. The Taliban's brief seizure of Kunduz marked the insurgent group's biggest foray into a major urban area since the 2001 U.S.-led invasion ended their rule. Afghan forces have been struggling to combat the Taliban since the U.S. and NATO shifted to a support and training role at the end of last year, officially ending their combat mission in the war-torn country. Militants blocked and mined roads as soon as they entered Kunduz to prevent people from leaving and to thwart the government's assault. Fighting erupted anew in the embattled northern Afghan city of Kunduz on Tuesday after the Taliban attacked a police headquarters overnight and officials warned that food and other emergency aid cannot get through to the city. The clashes and the dire warnings underscored the tenuous hold authorities have on this strategic city whose fall to the Taliban was an embarrassing blow to President Ashraf Ghani. The Afghan government has been criticized for ignoring warnings earlier of Taliban threats to the city. Overnight, several militants managed to re-enter the city center and attack Kunduz police headquarters and other government buildings, said Sarwar Hussaini, the spokesman for the provincial police chief. By Tuesday morning, some gunmen had pushed their way close to the main city square. "Fighting is also going on with the Taliban near the Ghazanfar Bank, close to main square," Hussaini said.

Kunduz residents reported hit-and-run attacks by the Taliban, with the insurgents making incursions into the city center from far-flung rural areas, engaging troops, then retreating again. Abdul Manan, a resident who spoke to The Associated Press over the phone, said he had seen a group of Taliban fighters enter the main square, remove the government flag and exchange fire with troops for half hour, then flee from the area.

With the Taliban blitz, shops closed and people shuttered in their homes, as the humanitarian situation steadily worsened in Kunduz. Deliveries of food and other basic essentials have not been able to get in since the Sept. 28 Taliban assault. Aslim Sayas, a deputy head of the Afghan disaster management, said it was still too dangerous and unpredictable for supplies to be trucked into Kunduz. Instead, he said authorities were helping the population that has fled from Kunduz. "Right now we are providing food and non-food items to refugees and displaced people in Takhar, Badakhshan and Balkh," he said, referring to northern provinces to the east and west of Kunduz. Medicines, too, have not been delivered to hospitals, and the air strike on the Doctors Without Borders trauma center had closed an essential medical facility in the war-torn city. The Ministry of Public Health issued a statement calling for "a thorough, impartial investigation by an independent enquiry team" into the Saturday bombing of the hospital.