U.N. diplomat charged by US for bribe scheme gets $2 million bail 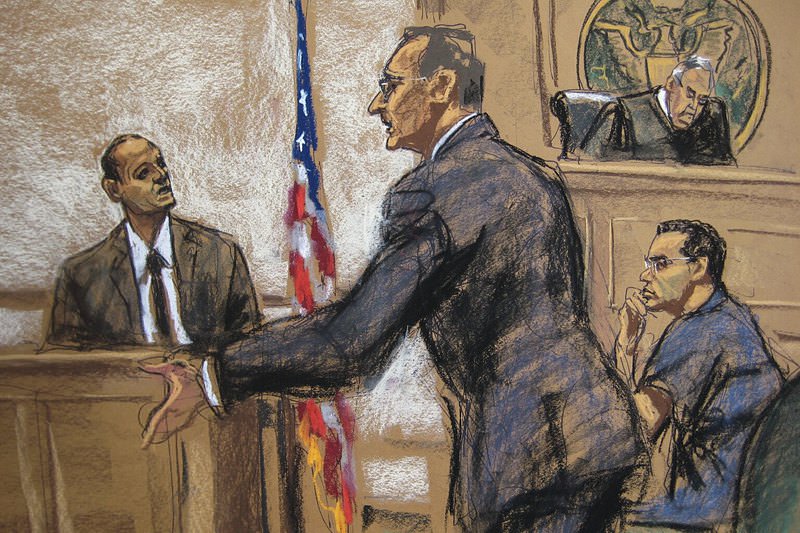 Judge H. Pitman (R), attorney B. Bieber (C), witness C. Bates (L) and defendant Francis Lorenzo (R lower), Deputy UN Ambassador for the Dominican Rep. are shown in this courtroom sketch at his bail hearing Oct 9, 2015. (REUTERS Photo)
by reuters
Oct 09, 2015 12:00 am
A deputy United Nations ambassador from the Dominican Republic facing U.S. charges over a bribery scheme had his bail set at $2 million on Friday, despite a prosecutor's warnings that he poses a flight risk.

Francis Lorenzo, who was arrested on Tuesday, must also live under house arrest with his mother after bail conditions are met and waive diplomatic immunity from future arrest, a federal magistrate judge in Manhattan ruled.

The decision by U.S. Magistrate Judge Henry Pitman came over the objections of prosecutor Daniel Richenthal, who said the ongoing investigation had unearthed evidence that Lorenzo received even more bribes than authorities initially alleged.

"His incentive to flee is massive," Richenthal said.

Brian Bieber, Lorenzo's lawyer, sought to assure Pitman that Lorenzo would return to court, adding the Dominican Republic had just suspended him from his post. Outside of court, Bieber said he was confident that Lorenzo "didn't commit a federal crime."

The hearing followed the announcement of U.S. charges on Tuesday against six individuals including Lorenzo and John Ashe, a former president of the U.N. General Assembly and U.N. ambassador from Antigua and Barbuda.

Prosecutors said Lorenzo, 48, acted as an intermediary for Ng to pay $500,000 to Ashe to submit a document telling the U.N. secretary general that a yet-to-be built multibillion-dollar U.N.-sponsored conference center in Macau was needed.

At the same time, Ng paid Lorenzo $20,000 monthly while he served as "honorary president" of one of his organizations, South-South News, and directed additional payments to a company controlled by Lorenzo's brother in the Dominican Republic, prosecutors said.

At Friday's hearing, Richenthal, the prosecutor, said the bribes were even more extensive than first alleged and included being allowed to live in a $3.6 million luxury apartment near the United Nations that Ng bought last month.

Lorenzo also received a $20,000-per-month contract with another of Ng's organizations, Sun Kian Ip Group Foundation, after attending a conference in Macau where Lorenzo "aggressively pushed" for the conference center, Richenthal said.

Bieber acknowledged Lorenzo, who was living in an apartment rented by South-South News, had been offered the opportunity to live in the apartment, but said it was "not gifted to him in any manner."
Last Update: Oct 10, 2015 12:20 am