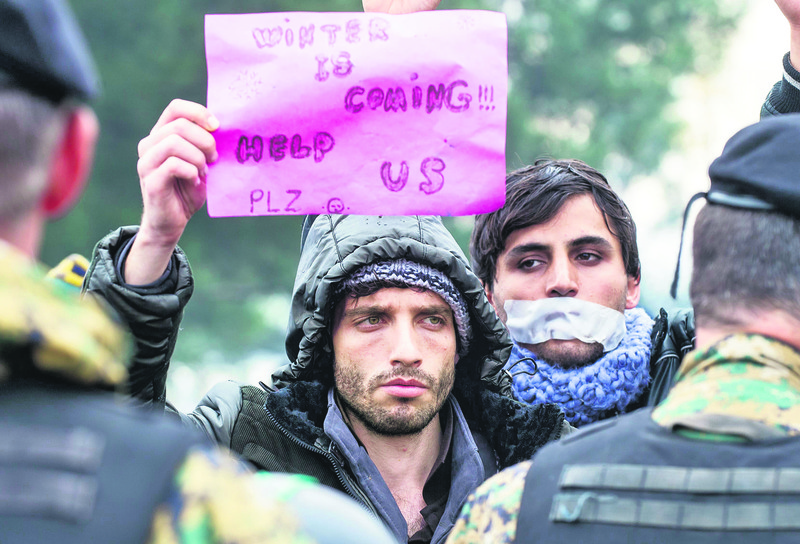 As refugees face new entry restrictions to European countries after the Paris attacks, the U.N. and rights groups decried limitations while U.N. High Comissioner for Refugees Guterres said refugees shouldn't be shunned amid fear of terrorism as they are the victims of terrorists

U.N. refugee chief Antonio Guterres said Wednesday that people fleeing violence and war must not be shunned amid growing fears of terrorism after the deadly Paris attacks.

"Refugees are victims of terrorists and it's very important to make this distinction," the U.N. High Commissioner for Refugees since 2005 told a press conference in the Japanese capital. The Paris attacks "were not caused by the refugee movement," Guterres stressed, calling the perpetrators "clearly home-grown."

Europe has been struggling for months to cope with its largest migrant crisis since World War II. The refugee debate has become more politically charged and concerns about security have increased since DAESH killed 130 people in Paris this month in the worst such violence on French soil. The attacks have stirred fears in Europe and North America that extremists could try to blend in with refugees to gain entry to Europe or the U.S. and strike later.

Guterres said "chaotic" movements of refugees through the Balkans has led to a "feeling of insecurity" among Europeans. He stressed that it was thus important for Europe to institute more organized migrant entry reception and screening at entry points to cope with the crisis. "And then organize the distribution among all the European countries in a way that does not create the imbalance we have today" whereby countries such as Germany and Sweden bear by far the biggest burden, Guterres said.

Guterres' visit to Japan comes shortly before he is due to step down. Italian diplomat Filippo Grandi has been appointed to take up the job as of Jan. 1. Guterres appeared at a joint press conference with Fast Retailing, the Japanese company that runs casual fashion chain Uniqlo.

Fast Retailing announced that it will provide $10 million worth of aid to the U.N. refugee agency over three years from 2016 and also plans to hand out winter underwear to refugees and displaced people in the Balkan states and Afghanistan.

Meanwhile, French Prime Minister Manuel Valls on Tuesday urged the European Union to limit the number of migrants it allows into the bloc. Valls said last week that some of the suspects in the Paris attacks took advantage of Europe's migrant crisis to "slip in" unnoticed.

"We cannot accommodate any more refugees in Europe, that's not possible," Valls told the Sueddeutsche Zeitung, adding that tighter control of Europe's external borders would determine the fate of the European Union. "If we don't do that, the people will say: Enough of Europe," Valls warned.

The comments were published only hours before German Chancellor Angela Merkel was scheduled to meet French President Francois Hollande in Paris. Merkel was initially celebrated at home and abroad for her welcoming approach to the refugees, many of whom are fleeing conflict in the Middle East. But as the flow has continued the chancellor has come under increasing criticism.

A total of 60 million people worldwide have been driven from their homes by wars and persecution, an all-time high, surpassing the 50 million people displaced during World War II, according to UNHCR. About 858,805 refugees and migrants have arrived in Europe so far this year by sea, primarily to Greece and Italy, while 3,548 have died or gone missing, according to a recent report by the International Organization for Migration (IOM).
Last Update: Nov 26, 2015 1:01 am
RELATED TOPICS