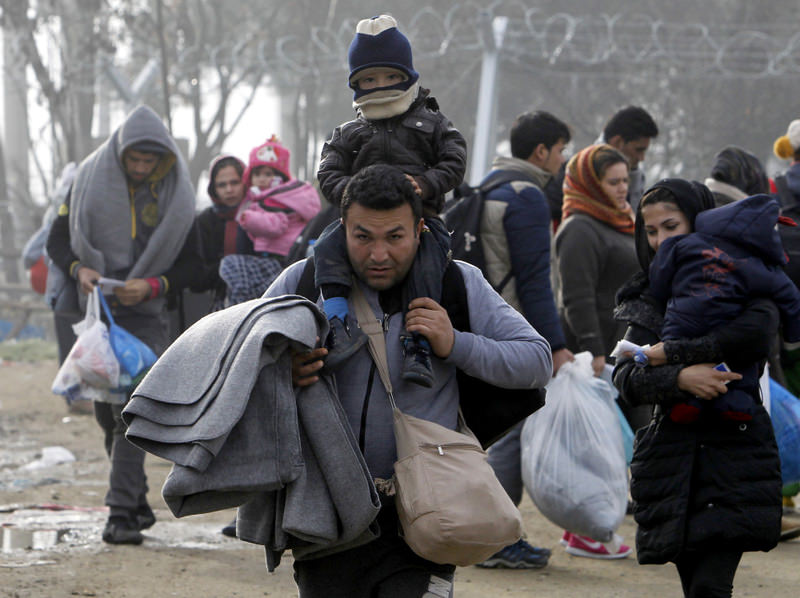 Migrants who crossed the border from Greece walk towards a transit center for refugees near the southern Macedonia's town of Gevgelija.
by Daily Sabah with Wires Jan 14, 2016 12:00 am

The U.N. announced that the number of international migrants worldwide reached 244 million last year, a 41 percent increase compared to 2000. While experts say the number is growing, they warn against xenophobia and pervasive anti-migrant sentiments

The number of people who migrated to foreign countries surged by 41 percent in the last 15 years to reach 244 million in 2015, according to a United Nations study released Tuesday. Of those people, 20 million are refugees.

The U.N. is planning a series of meetings in 2016 to address migration, including a March 30 gathering in Geneva where countries can pledge to take in Syrians fleeing civil war. But while the Syrian refugee crisis has gripped the world's attention, it is but a drop in the sea of international migration.

Europe has seen nearly 900,000 refugees and migrants so far this year, about half of them Syrians fleeing war in their homeland, the U.N. High Commissioner for Refugees said earlier this month.

Nearly half of the world's migrants were born in Asia, which has provided the most migrants - 1.7 million people per year - over the last 15 years, followed by Europe, according to a report by the U.N. Department of Economic and Social Affairs.

The number of migrants around the world will no doubt rise, fueled by economic disparities, globalized markets and people seeking better lives, U.N. Deputy Secretary-General Jan Eliasson said presenting the report. He called for stronger efforts to protect people undertaking dangerous journeys as they flee their homes, and efforts to fight migrant smuggling and human trafficking. He also said migrants should not be victimized nor made into scapegoats.

"The many stories of their resilience, strength and heroism are too often eclipsed by xenophobia and pervasive anti-migrant sentiments," Eliasson said. He also called on countries to contribute to humanitarian appeals to ease the strain on Lebanon, Jordan and Turkey, which bear the brunt of the Syrian refugee crisis.

Two thirds of all international migrants live in just 20 countries, the report said. The largest number, 47 million, live in the United States, followed by 12 million in Germany, 12 million in Russia and 10 million in Saudi Arabia, it said.

India had the world's biggest diaspora, with 16 million people, followed by Mexico (12 million), Russia (11 million), China (10 million) and Bangladesh (7 million) and Pakistan and Ukraine (6 million each).

Migrants made up just 3.3 percent of the global population in 2015, up from 2.8 percent 15 years ago. Still, international migration is growing faster than the world's population, with significant consequences for many regions.

The U.N. said in October that more than 60 million people were displaced by conflict and persecution around the world. The turmoil in the Middle East, Africa and the five-year war in Syria have led many people to flee the conflict in an attempt to seek security and shelter in a more prosperous and peaceful country, such as in Europe. Roughly half of Syria's population has been displaced by violence, with over 4 million Syrians now seeking refuge in neighboring countries, especially Turkey which hosts more than 2 million refugees.
RELATED TOPICS