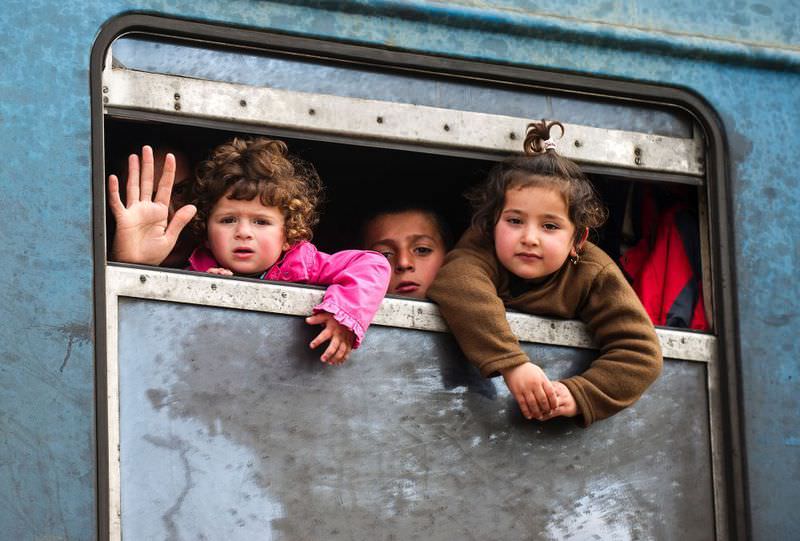 Migrants look out of the window from a train heading to Serbia at the border between Greece and Macedonia near the town of Gevgelija on Feb. 8.
by Daily Sabah with AFP Feb 10, 2016 12:00 am

The EU adopted a relocation scheme last September for 160,000 asylum seekers, but it has thus far taken in only 500 people. Several experts speak of growing doubts that the plan will succeed due to the reluctance of many governments

Since adopting the scheme last September to relocate 160,000 asylum seekers from frontline states Greece and Italy, European Union countries have moved at a snail's pace, and thus far taken in just 500 people.

Having pushed through his pet project for easing a crisis that saw more than one million people arrive on European shores last year, the former premier of Luxembourg Juncker last month vowed "not to give up" on the scheme. But two EU diplomats, an official from an EU country, an analyst, and a person working on relocation spoke of growing doubts that the plan will succeed, in the face of the reluctance of many governments in the 28-nation bloc.

"I think people are afraid it's going to fail," one diplomat told AFP. "Some are losing hope and some are exploiting this loss of hope." European sources blame the delays on a series of factors: governments trying to screen extremists in the wake of the Paris attacks, a lack of housing and education for asylum seekers, and logistical problems over chartering planes.

Hungary's Prime Minister Viktor Orban has been the most vocal eastern European opponent to admitting Muslims, saying in October that "Islam has never been part of Europe."

Slovak Prime Minister Robert Fico also pointed to Muslims as a potential threat to his country, and said his government was "monitoring" its community in the wake of the Paris attacks. Fico sparked criticism last year when he said Slovakia would prefer to accept Christian refugees under the resettlement plan.

The relocation plan is designed to help people fleeing the mainly Muslim war-torn countries of Syria and Iraq, as well as the repressive east African state of Eritrea. In the wake of attacks like the Paris massacre, officials working on relocation said that France, Belgium, and Sweden were leading a "misplaced" push for stricter checks to weed out extremists from the bona fide refugee.

The scheme's failure so far means that many migrants have lost confidence that they will be moved from Greece or Italy, and instead are making their own way to preferred destinations like Germany and Sweden. This is putting extra strain on the EU's passport-free Schengen area, in which several states have already reintroduced border checks.

"On the whole the sentiment that is felt in this Brussels bubble is that this (relocation) plan will never really be properly implemented, that it has been too idealistic," an eastern European diplomat, preferring to be unnamed, told AFP.

With cases such as the Cologne New Year sex assaults still in the headlines, the European Commission had also failed to communicate its ideas on how refugees would be integrated into their new countries, the diplomat added. "The only thing we see in central and eastern Europe are the experiences of the western European countries, which are absolutely horrible, especially as presented by the media," the diplomat said.

Demetrios Papademetriou, president of the Brussels-based Migration Policy Institute Europe, suspected EU countries were resisting the relocation quotas because they saw "no end in sight" to the migrant crisis. The European Commission warned against writing off its migration policy. "President Juncker compared the situation we face now with the refugee crisis to the situation in 2010 with the financial crisis," a spokesperson told AFP. "Many speculated about the euro failing, but five years later, recovery is underway and the EU is expecting two percent growth this year. The building blocks of a sustainable migration policy are now on the table, what is needed is implementation."

The turmoil in the Middle East and the five-year-long civil war in Syria have led many people to flee regional conflicts, in an attempt to seek security and shelter in more prosperous and peaceful countries, such as those in Europe. However, Europe has been severely criticized for lacking a collaborative response to the crisis.
RELATED TOPICS