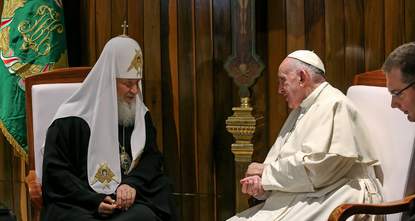 by Feb 12, 2016 12:00 am
Pope Francis and the leader of the Russian Orthodox Church, Patriarch Kirill, have met in Cuba in a major advance towards healing a 1,000-year-old rift between Roman Catholics and Orthodox Christians.

During what Francis called a "demanding" trip, he will tour Mexico for six days.

The meeting between Francis and Kirill at Havana's international airport was many years in the planning.

"It is a demanding journey, very packed, but much desired by brother Kirill, by me and also by the Mexicans," the pontiff told reporters on the flight, according to the Vatican's press office.

"This meeting ... will be the first in history and will mark an important stage in relations between the two churches," the Holy See and the Patriarchate of Moscow said in a joint statement last week, when they announced the encounter.

Francis and Kirill were due to sign a joint declaration, in the presence of Cuban President Raul Castro, expected to focus on ecumenism, or efforts to reunite Christian churches, common Christian values, and the persecution of Christians in the Middle East and Africa.

But Cardinal Kurt Koch, head of the Vatican's ecumenical department, told Vatican Radio that it would be "impossible" to avoid thornier issues such as Ukraine, where local Catholics and Orthodox Christians are at loggerheads.

Francis represents the world's 1.25 billion Catholics, while Kirill is in charge of the largest church in the Orthodox community, with about 150 million followers in the post-Soviet world.

Given the close links between the Russian Orthodox Church and the Kremlin, the meeting in Cuba is also seen as an indirect Vatican overture to President Vladimir Putin, amid his country's international isolation over Syria and Ukraine.

Theological differences between Rome and Moscow can be traced to the Great Schism of 1054, when Christianity split between the Roman Catholic and Orthodox churches, primarily over the issue of papal authority.

Christian Orthodox are themselves split in more than a dozen churches, who will hold their first-ever summit in June in Crete, Greece. Improving intra-Orthodox ties is a prerequisite to the long-term objective of healing the 1054 rift.

Francis was stopping in the Cuban capital on the way to a February 12-18 pilgrimage to Mexico.

Kirill arrived in Havana late on Thursday, as part of a Latin American trip that was to take him on to Brazil, Chile and Paraguay.

Before leaving, the pope posted a Twitter message: "In Mexico I will look into the eyes of the Virgin Mary and implore her to look upon us always with mercy. I entrust my journey to her."
Last Update: Feb 12, 2016 10:02 pm
RELATED TOPICS