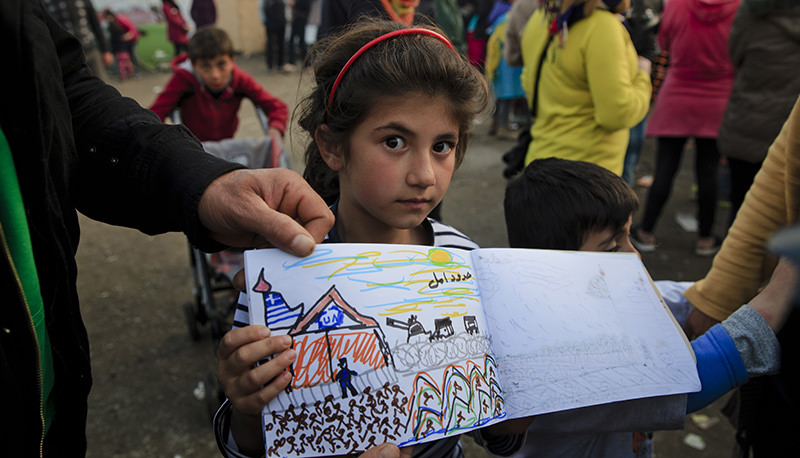 Shaharzad Hassan, 8 year-old from the Syrian city of Aleppo poses with a drawing she made at the northern Greek border station of Idomeni, Friday, March 11, 2016. (AP Photo)
by Associated Press Mar 16, 2016 12:00 am

As other children play among the tents of a rain-soaked refugee camp in northern Greece, 8-year-old Shaharzad Hassan sits quietly with her spiral notepad and a set of cheap marker pens.

The events in her life over the past 18 months have left her in little mood for fun. She prefers to draw. Sitting on the floor of a large tent crammed with 30 other families, she produces pictures of death in her hometown of Aleppo, Syria, and her harrowing journey to Europe.

Her father, Mohammed Hassan, sits with his daughter in the pink hoodie and explains one of her drawings. It shows dead people and Islamic State fighters dressed in black, shooting.

"She saw them with her own eyes, with their black uniforms and beards," he says.

More than half of the refugees reaching Greece daily are fleeing civil war in Syria. But more than 40,000 people are now stranded in Greece after Austria and the Balkan countries north of Greece began imposing border restrictions last month.

Shaharzad, her family and 14,000 others are camped out at Idomeni, on the Greek-Macedonian border a sprawling, muddy assortment of tents where no one has crossed the border legally for days and conditions have deteriorated following days of torrential rain.

One of Shaharzad's drawings, inspired by conditions at the camp, shows refugees waiting in long lines for food and other essentials. It is called "Famine 2016."

"Here is a drawing of the famine. This is the bread truck that is distributing to the people, and the cameramen filming the people. And here are the tents with the burning fires (to stay warm)," her father says.

Hassan, a Syrian Kurd who worked as a taxi driver in Aleppo, sold his cab and moved to the nearby Syrian town of Afrin on the Turkish border, but decided to move on to Europe to try to join relatives in Germany after his money ran out.

One of Shaharzad's drawings is of her crossing to Greece, where she witnessed a rescue by the Greek coast guard after another vessel sank in the eastern Aegean Sea.

"This drawing shows the journey from Turkey to Greece ... and a sinking boat and a Greek ship saving the people from the sea," her father said.