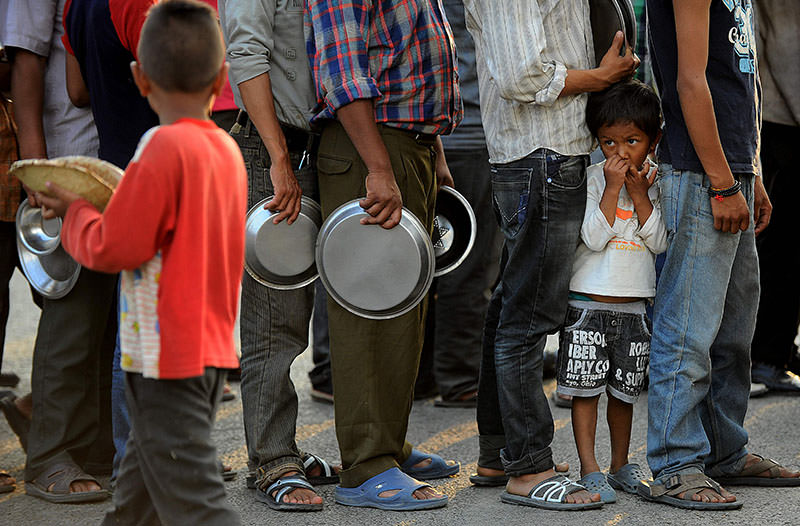 In this photo taken on May 19, 2015, displaced Nepalese residents queue to receive food and goods at a relief camp for survivors of the Nepal earthquake (AFP)
by Daily Sabah Apr 04, 2016 12:00 am

Child survivors of the Nepal earthquake who are as young as 10 are being sold to British families as household slaves for around 5,300 pounds, revealed a report published on Sunday by the British tabloid The Sun.

According to the report, gangs operating in India's Punjab region target Nepalese children who survived last April's earthquake which killed almost 9,000 people, as well as children from poor families from the Indian state of Bihar. They sold the desperate children to rich British families as unpaid domestic servants.

The Sun secretly filmed a slave trader named Makkhan Singh and quoted him as saying "We have supplied lads who have gone on to the U.K." Singh said The Sun claimed that slave traders sell the children to rich families "who lock them up at home in India while training them and arranging dodgy travel documents."

U.K. Home Secretary Theresa May urged the National Crime Agency to investigate these claims, reported the Guardian. "No child, anywhere in the world, should be taken away from their home and forced to work in slavery," she added.

The April 25 earthquake hit Nepal with a magnitude of 7.8 and killed almost 9,000 people, while injuring up to 18,000 others. It was the worst natural disaster to strike Nepal since the 1934 Nepal-Bihar earthquake which killed around 12,000 people.