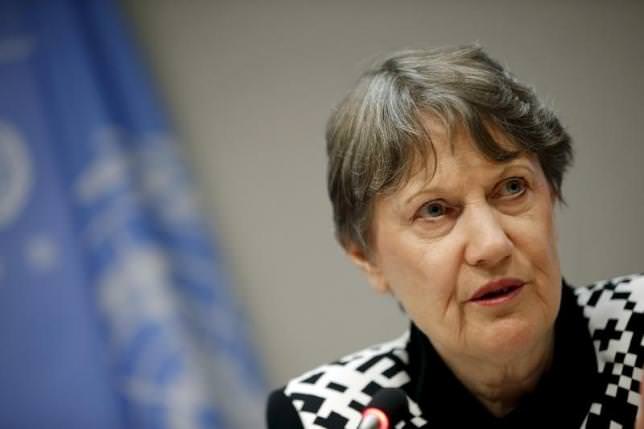 Former New Zealand Prime Minister Helen Clark entered to race to be the next UN Chief. (REUTERS Photo)
by Apr 05, 2016 12:00 am

Former New Zealand Prime Minister Helen Clark said on Monday she would campaign to be the next U.N. secretary-general, pledging to improve transparency and touting her leadership experience in a bid to become the first woman to head the world body.

New Zealand submitted a letter on Monday to the president of the 193-member General Assembly formally nominating Clark, who heads the U.N. Development Programme, as a candidate to succeed Secretary-General Ban Ki-moon.

Ban, a former South Korean foreign minister, will step down at the end of 2016 after two five-year terms. A man has held the top job at the United Nations since its inception 70 years ago and there is a strong push for a woman to be elected.

"I'm seeking election on the basis of the skills that I have and I would expect in the 21st century to be given equal consideration to any male applicant," Clark, New Zealand prime minister from 1999 to 2008, told Reuters in an interview.

At least 53 countries, led by Colombia, want a female secretary-general. Several civil society groups are also lobbying for a woman to lead the organization.

The 15-member U.N. Security Council, including veto powers China, Russia, the United States, Britain and France, will recommend a candidate for election by the General Assembly later this year to succeed Ban.

"The biggest challenges (facing the United Nations) are the changing nature of the peace and security issues - they are not what the U.N. was founded to deal with," Clark said. "It requires a new set of tools."

The General Assembly will hold a series of informal public meetings with each candidate next week.

"Coming from New Zealand, we live in a very diverse region, we have a very diverse country, so trying to reconcile differences, bridge gaps, has been in my DNA," she said. "Those are very valuable skills here at the U.N."