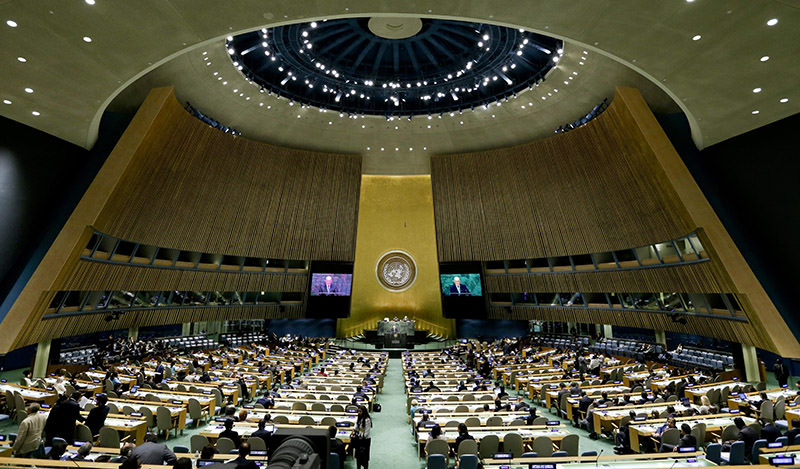 | AP Photo
by Associated Press
Apr 09, 2016 12:00 am
For the first time in the 70-year history of the United Nations, all the member states will get a chance to question the candidates for Secretary-General, in a move to make the usually secret selection process for the world's top diplomatic post more transparent.

Last year, the U.N. General Assembly responded to the strong demand from many countries that Secretary-General Ban Ki-moon's successor be chosen in a more open process, unanimously adopting a resolution allowing public hearings on how candidates would respond to global crises and run the U.N.'s far-flung bureaucracy.

The secretary-general is chosen by the 193-member General Assembly on the recommendation of the 15-member Security Council, according to the U.N. Charter.

In practice, this has meant that the council's five permanent members the U.S., Russia, China, Britain and France have veto power over the candidates. That will not change in deciding whom to recommend to succeed Ban, whose second five-year term ends on Dec. 31.

But General Assembly President Mogens Lykketoft said in a recent interview that the two-hour public discussions with each candidate, starting Tuesday, are "potentially game-changing."

If a leading candidate emerges and a critical number of countries rally around him or, in what would be a first, her "I think it will be very difficult, and probably not possible, for the Security Council to come up with quite a different candidate," he said.

If the race is unclear, however, then the Security Council "will have a more deciding influence," Lykketoft said.

The resolution adopted last September stresses the need for "gender and geographical balance while meeting the highest possible requirements."

The resolution invited all countries "to consider presenting women as candidates," but also stressed that the candidate must be highly competent.

There are currently four women and four men who have thrown their hats in the ring six from Eastern Europe, one from Western Europe and one from the Asia-Pacific region.

"I'm sure more candidates will be coming, that's for sure," Lykketoft said, "but how many, I don't know."

There is no deadline for jumping into the race, but diplomats said the Security Council is expected to hold its first "straw poll" on the candidates in late July. The 15 council members will vote "encourage" or "discourage" on each candidate and the result will be made public.

Two women mentioned in U.N. corridors as possible strong late entries are German Chancellor Angela Merkel, though she reportedly isn't very keen on the job, and Kristalina Georgieva, another Bulgarian who is the European Commission's budget chief and a former top official at the World Bank.

The concentration of power in the five permanent members known as the P-5 often has produced U.N. chiefs with the appearance, some observers have said, of being more secretary than general.

Natalie Samarasinghe, executive director of the United Nations Association-UK and one of the founders of the 1 for 7 Billion campaign for reform in the secretary-general selection process, said that throughout the U.N.'s history "the Security Council concern has always been, 'who's not going to rock the boat, and who's going to cause the least trouble for us.'"

That dynamic has changed somewhat with the new, more open selection process, which "is going to be impossible for the Security Council to completely ignore," she said.

Britain's U.N. Ambassador Matthew Rycroft, who encouraged more "credible candidates" to enter the race, said the interviews will be "very important" in the final decision.

"If a candidate does well in the hearings then clearly that is going to increase the prospects of Security Council members encouraging them through the process," he said.

"For us it's important that the next secretary-general enjoy the broadest possible support among members of the United Nations," he said.

Ukraine's U.N. Ambassador Volodymyr Yelchenko, a council member, called it "a very useful exercise, although with many, many unclear questions of what will be the outcome, and what will be the final platform to judge the qualities of each of eight candidates."

The 1 for 7 Billion campaign, which Samarasinghe said is supported by 750 non-governmental organizations worldwide, is also calling for a single longer term to give the next secretary-general more independence from the major powers.

Lykketoft said the Nonaligned Movement, which represents over 100 developing countries, supports the idea but he doesn't know whether they will push for a General Assembly resolution on a single term, possibly seven years.

The interviews will continue through Thursday. Lykketoft said they will be followed by a second round should new candidates emerge.

Secretary-General Ban is staying away from the hearings but is "delighted" they are happening, U.N. spokesman Stephane Dujarric said Friday.

Asked whether the U.N. chief had any advice for the candidates ahead of the hearings, Dujarric said that Ban always recalls the advice a middle school teacher in South Korea gave him: "Keep your feet firmly on the ground and your head in the clouds."
Last Update: Apr 09, 2016 7:54 pm