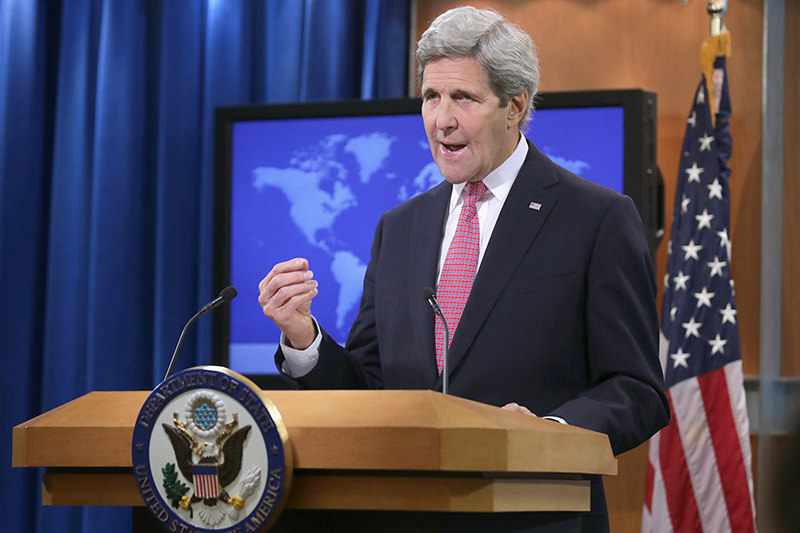 U.S. Secretary of State John Kerry delivers remarks about the release of the 2015 Human Rights Report. (AFP Photo)
by Compiled from Wire Services
Apr 14, 2016 12:00 am

Secretary of State John Kerry on Thursday condemned what the United States has called a simulated attack on a U.S. Navy ship in the Baltic Sea by two Russian warplanes, saying it was a dangerous and provocative act.

"We condemn this kind of behavior. It is reckless. It is provocative. It is dangerous. And under the rules of engagement that could have been a shoot-down," Kerry said in an interview with CNN Espanol and the Miami Herald. "People need to understand that this is serious business and the United States is not going to be intimidated on the high seas. ... We are communicating to the Russians how dangerous this is and our hope is that this will never be repeated."

On the other hand, Russia denied Thursday its fighter jets were engaged in provocative behaviour when they flew just metres from a U.S. destroyer in international waters in the Baltic Sea, exacerbating tensions between the rival powers.

The aircraft repeatedly buzzed the USS Donald Cook this week, including an incident on Tuesday when a Russian Su-24 jet flew 30 feet (nine metres) above the ship in a "simulated attack profile," the U.S. military's European Command said.

Ties between Russia and the West have plunged to their lowest point since the Cold War over Moscow's 2014 annexation of the Crimean peninsula from Kiev and its support for separatist rebels in eastern Ukraine.

One U.S. defence official called the actions of the Russian planes "more aggressive than anything we've seen in some time".

The destroyer's commanding officer Charles Hampton told journalists in Lithuania that "very low, very fast" flybys were "inconsistent with the professional norms of militaries in international waters or international airspace".

Russia countered the criticism, insisting it had observed all safety regulations.

Su-24 planes were conducting test flights in the area and "having observed the ship, turned away in observance of all safety measures," Russian defence ministry spokesman Igor Konashenkov said in a statement on the ministry's Facebook page.

"Frankly speaking, we don't understand such a sore reaction from our U.S. colleagues," the statement added.

The U.S. military's European Command (EUCOM) released video showing warplanes zooming so close past the Cook that one sailor can be heard saying: "He is below the bridge wing," meaning the plane was flying lower than the highest point of the ship.

The manoeuvres began Monday while the destroyer was located about 70 nautical miles from the Russian base in Kaliningrad, a Russian exclave on the Baltic Sea.

A Ka-27 Helix anti-submarine helicopter and Russian Su-24 planes flew around the ship, including a plane that was not visibly armed that made the particularly low approach captured on video.

U.S. sailors tried multiple times to hail the Russian aircraft on international frequencies but got no response, officials said.

A Polish helicopter had been conducting drills on the destroyer and was refuelling during one of the overflights. It suspended flight operations as a safety precaution until the planes left, EUCOM said.

Some pro-Kremlin media on Thursday depicted the incident as the Americans taking fright at the Russian pilots.

A journalist with Komsomolskaya Pravda daily wrote on Twitter that the planes had "trolled" the U.S. warship, which "got fresh" by coming so close to the Russian base.

Argumenty i Fakty newspaper accused the United States of "Russophobia", saying that the ship's crew and the Polish helicopter had been "scared" of the planes.

Hampton said his crew had tracked the warplanes' approach, and confirmed that they posed no danger.

"It's very important to understand that the objection from the U.S. navy about the Russians' military activity and the conduct is not about fear, but about safe and professional behaviour at sea," he said.

Poland, which had helicopter crews training take-offs and landings from the deck of the U.S. warship, and has long been wary of Russia's actions in its neighbourhood, was also furious.

"We cannot consider this anything but a provocation and a new example of aggressive intentions against NATO, the U.S. and Poland by the owner of these planes," its Defence Minister Antoni Macierewicz said.

Exactly two years before the latest flyby -- on April 12, 2014 -- a Russian Su-24 made numerous close-range, low-altitude passes near the Cook while it was in the Black Sea, in an incident the Pentagon at the time called a "provocative act".