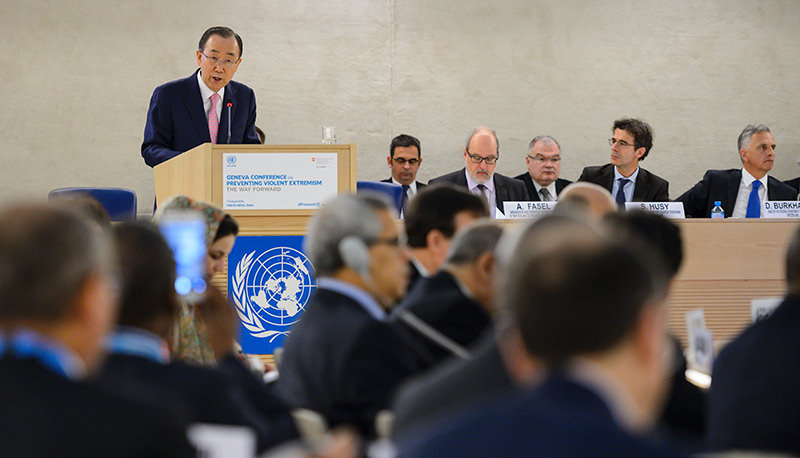 UN Secretary General Ban Ki-moon delivers a speech during a conference on preventing violent extremism around the world at the UN Offices in Geneva on April 8, 2016 (AFP Photo)
by Associated Press Apr 14, 2016 12:00 am
An open letter to U.N. Secretary-General Ban Ki-moon signed by more than 1,000 people, including financier Warren Buffett, U.S. Sen. Elizabeth Warren and rock star Sting, says the war on drugs has failed and calls for a shift in global drug policy from emphasizing criminalization and punishment to health and human rights.

The letter signed by former presidents of Mexico, Colombia, Brazil, Switzerland and others, was made public Thursday in advance of a United Nations special session on the topic beginning April 19. It was released by the New York-based Drug Policy Alliance.

Ethan Nadelmann, the DPA's executive director, said the number of people sympathetic to progressive and alternative approaches has swelled in the nearly two decades since the U.N.'s last special session on international drug policies.

"People are with us, and I think that this public letter has provided a vehicle," Nadelmann said.

The letter says that for decades, governments have focused resources on repressing drug use, resulting in the imprisonment of millions of people, mostly the poor and ethnic minorities, and mostly for non-violent offenses.

The signatories of the letter instead call for an emphasis on drug use as a health policy issue with the focus on "harm reduction," including funding addiction treatment and treatment of addicts who acquired HIV/AIDS and hepatitis through drug use.

Ilona Szabo de Carvalho, the Rio de Janeiro-based commission's coordinator, said the emphasis should be on alternative approaches including decriminalization, abolishing capital punishment for drug-related offenses and a focus on treatment.

In a speech last month, U.N. Office on Drugs and Crime Executive Director Yury Fedotov said preparations for the U.N. summit included new approaches including a call for treatment and services for drug-related cases of HIV, hepatitis and overdoses.
Last Update: Apr 14, 2016 7:40 am
RELATED TOPICS