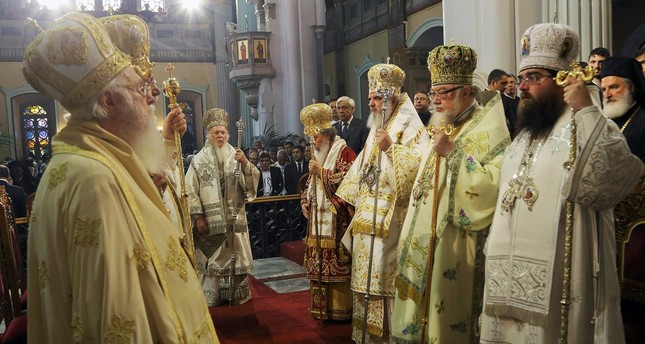 Religious Orthodox Christians leaders attend a liturgy inside a church in Heraklion on the Greek island of Crete on June 19, 2016. (AFP Photo)

The leaders of the world's Orthodox Christian churches have gathered on the Greek island of Crete for a landmark meeting, despite a boycott by the Russian church — the most populous in a religion of some 300 million people — and three other churches.

Ecumenical Patriarch Bartholomew led prayers attended by other church leaders Sunday to mark the start of the weeklong summit — the first of its kind in more than 1,200 years.

Pope Francis sent a message of support on Twitter, writing: "Let us join in prayer with our Orthodox brothers and sisters for the Holy and Great Council of the Orthodox Church opening today in Crete."

Despite decades of preparation, Orthodox leaders failed ahead of the meeting in Crete to overcome differences. They include efforts to reconcile with the Vatican and areas of influence that typically predate current national borders.

Patriarch Kirill of Moscow is not attending the meetings, arguing that preparation had been inadequate. Serbia's Church leadership did attend despite having close ties with the Russian Church, but the Georgian, Bulgarian and Syria-based Antioch patriarchates skipped the synod.

In a statement Friday, Kirill said he hoped religious leaders gathered in Crete could prepare for a full meeting at a later date. Kirill visited Greece last month, joining Russian President Vladimir Putin on a trip to the monastic sanctuary of Mount Athos.

Church leaders gathered at the Cretan city of Iraklio also stressed the need for unity among the churches, with some publicly supporting efforts to organize a later meeting with the Russians present.

"We are on a steady course toward a great Synod and sending the message that our people need," Archbishop Chrysostomos II of Cyprus said. "Orthodoxy has shown that it can be united."

Unlike the centralized authority of the Vatican over Roman Catholics, Orthodox churches are autocephalous, or independent, with Bartholomew considered as the first among equals.

But the Ecumenical Patriarchate is based in Istanbul in predominantly Muslim Turkey and is frequently at odds with Moscow, with the Russian Church having restored much of its power after Communism and representing more than 100 million faithful.

"It is well known that relations between the Church and state have gone through many stages. But regardless of how one may characterize these relations, both the church and the state are interested in the welfare of man," Bartholomew said.

Last week a spokesman for Bartholomew had expressed disappointment at Moscow's decision.

"The Church of Russia's decision was 48 hours before the primates were expected here in Crete. Nothing else had happened in the months between January and their decision in early June," the spokesman, Rev. John Chryssavgis, told a Church internet channel.

The Syria-based Antioch Patriarchate was absent due to a dispute with the Jerusalem Patriarchate over the jurisdiction of the Muslim Gulf state of Qatar.

But representatives from many other parts of the world were represented, including Patriarch Theodoros II of Alexandria and All Africa, Archbishop Rastislav of Czech Lands and Slovakia, and Archbishop Anastasios of Albania.

Share on Facebook Share on Twitter
Previous in World Turkey condemned the life sentence handed down by Egypt Saturday to... Next in World Six people died and more than 40 were injured in a clash between police...
DAILY SABAH RECOMMENDS