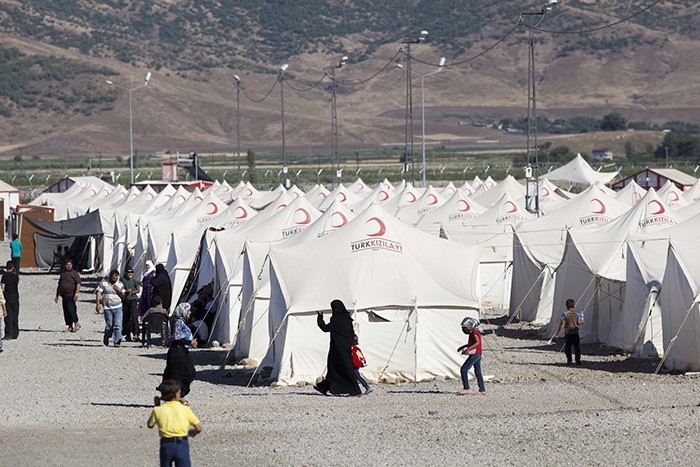 Syrian refugees at the Islahiye refugee camp in Hatay, Turkey 04 July 2012. One of eight refugee camps set up by Turkey and run by the Turkish Red Crescent to take refugees from the current conflict in Syria. (EPA Photo)
by Daily Sabah with Agencies Jun 20, 2016 12:00 am

The U.N. refugee agency says persecution and conflict in places like Syria and Afghanistan raised the total number of refugees and internally displaced people worldwide to a record 65.3 million at the end of last year, while Turkey is announced as the top refugee hosting country.

The previous year, 2014, had already seen the highest number of refugees worldwide since World War II, with 60 million displaced people. But last year — when Europe staggered under the arrival of large numbers of migrants — topped that record by nearly 10 percent, the UNHCR said Monday in unveiling its annual Global Trends Report.

"This is the first time that the threshold of 60 million has been crossed," the UN refugee agency said.

The Geneva-based agency urged leaders from Europe and elsewhere to do more to end the wars that are fanning the exodus of people from their homelands.

"I hope that the message carried by those forcibly displaced reaches the leaderships: We need action, political action, to stop conflicts," said Filippo Grandi, the U.N. High Commissioner for Refugees. "The message that they have carried is: 'If you don't solve problems, problems will come to you.'"

"The willingness of nations to work together not just for refugees but for the collective human interest is what's being tested today," he said in a statement.

With stark detail, UNHCR said that on average, 24 people had been displaced every minute of every day last year — or 34,000 people a day — up from 6 every minute in 2005. Global displacement has roughly doubled since 1997, and risen by 50 percent since 2011 alone — when the Syria war began.

The number of people displaced globally rose by 5.8 million through 2015, according to the UN figures.

More than half of all refugees came from three countries: Syria, Afghanistan and Somalia.

Turkey was the "top host" country for the second year running, taking in 2.5 million people — nearly all from neighboring Syria. Afghan neighbor Pakistan had 1.6 million, while Lebanon, next to Syria, hosted 1.1 million.

Grandi said policymakers and advocacy groups admittedly face daunting challenges helping the largest subset of displaced people: Some 40.8 million internally displaced in countries in conflict. Another 21.3 million were refugees and some 3.2 million more were seeking asylum.

More than a million people fled to Europe last year, causing a political crisis in the EU.

Grandi called on countries to work to fight the xenophobia that has accompanied the rise in refugee populations, and decried both physical barriers — like fences erected by some European countries — as well as legislative ones that limit access to richer, more peaceful EU states.

Such European policies were "spreading a negative example around the world," he said.

"There is no plan B for Europe in the long run," Grandi said. "Europe will continue to receive people seeking asylum. Their numbers may vary ... but it is inevitable."

A picture of 3-year-old Syrian, Aylan Kurdi, whose body was found washed up on a Turkish beach after the boat carrying his family to a Greek island sank in September, made the headlines and became a symbol of the world's indifference to the Syrian crisis, focusing attention on the millions of people who have been displaced by atrocities in their countries.

Several countries in Europe and the U.S. have seen rising anti-migrant and anti-Islamic attacks, as Muslim citizens have been harassed, mosques have received threats and refugee shelters have been set on fire, with rallies against migrants and Muslims around the world. With the refugee influx, Europe's populist far-right parties increased their votes with anti-migrant discourse in Europe.

The number of migrants and refugees from Syria, Afghanistan, Egypt, Eritrea, Iraq, Nigeria, Somalia, Sudan and Tunisia traveling overland through the Balkans on their way to the EU has dramatically increased in recent years. After Balkan countries closed their borders, Ankara and the EU struck a deal in March to stem an influx that brought a million refugees and migrants to Europe in 2015. Progress has lagged on a scheme to redistribute 160,000 asylum seekers from Greece and Italy to other EU states to alleviate pressure on the two frontline countries. Only 2,406 people have been relocated, EU figures show.

Over 165,000 refugees and migrants have arrived in Europe by the Mediterranean in 2014, as indicated by the U.N. and Amnesty International. More than 1 million refugees, mostly Syrians who fled violence and persecution in their country, arrived in Europe in 2015. Most of them made perilous journeys across the Mediterranean and at least 3,760 died, according to the International Organization of Migration (IOM). The United Nations put the number of people displaced by conflict at over 65 million around the world, a figure that stood at 38 million 10 years ago. Most of them are displaced due to political unrest, economic problems and climate change in the Middle East, South Asia and Africa.