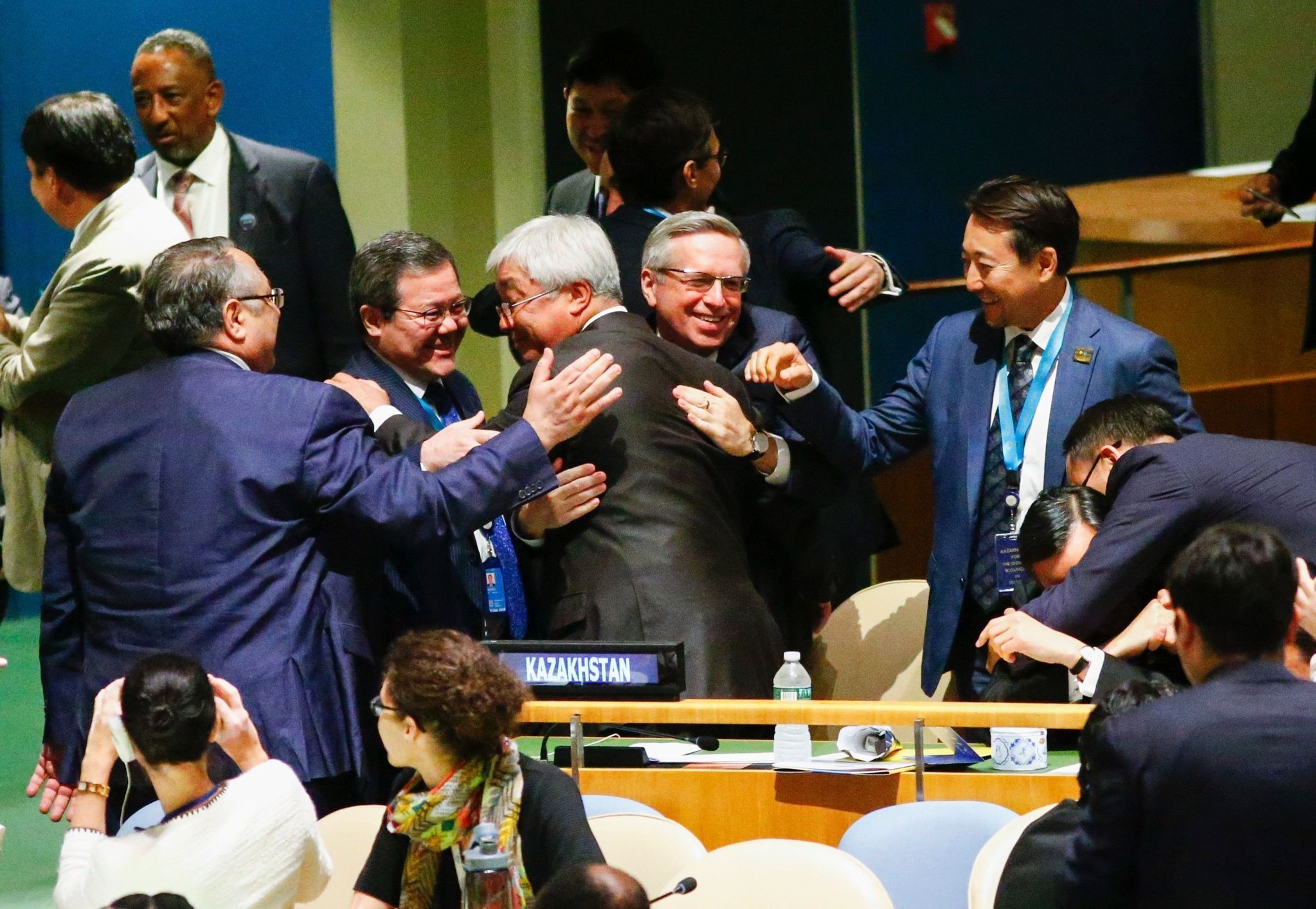 Kazakhstan's FM Erlan Idrissov (C) reacts after Kazakhstan won a seat during the Election of five non-permanent members of the Security Council at the United Nations in New York on June 28 2016. (AFP Photo)
by Compiled from Wire Services Jun 28, 2016 12:00 am

Kazakhstan was elected to the United Nations Security Council as a non-permanent member on Tuesday, beating Thailand in a second round of voting to join Sweden, Ethiopia and Bolivia for a two-year term starting Jan. 1, 2017.

The 193-member U.N. General Assembly elected Kazakhstan with 138 votes in favor over Thailand. Countries need more than two-thirds of the vote to win a seat. A third round of voting is due to take place for the final available seat with Italy competing against The Netherlands.

After the first round, Kazakhstan was ahead with 113 votes compared to 77 for Thailand, but the central Asian country fell short of the two-thirds majority required to win election to the seat reserved for Asia.

Among the world's top aid donors, Sweden picked up 134 votes, scoring an outright win, while the Netherlands garnered 125 votes and Italy 113, falling short of the required majority.

The five newly elected countries will take their place alongside the five permanent council members -- Britain, France, China, Russia and the United States.

The other five non-permanent members are: Egypt, Japan, Senegal, Ukraine and Uruguay.

Ethiopia picked up 185 votes, running unopposed as the candidate from Africa.

With some 8,100 troops deployed in U.N. missions, Ethiopia is the largest contributor of U.N. peacekeepers and has been active in trying to mediate an end the war in South Sudan.

Bolivia, which had the backing of Latin American and Caribbean countries, won 183 votes.

Italy has lobbied fiercely for a council seat, portraying itself as a crossroads country in the Mediterranean and touting its experience dealing with the refugee crisis.

Italy is also seen as a player in efforts to pull Libya out of chaos.

The Netherlands, home to the International Criminal Court and other world tribunals, has played up its commitment to international justice.

The vote for a seat at the top diplomatic table caps years of lobbying by contenders.

As the ballot got underway, delegates at the 193-nation General Assembly were handed gift bags with miniature tulips and wooden shoes from the Netherlands, Baci chocolates from Italy and a buddha figurine from Thailand.