At the end of his tenure, the world barely remembers Obama was once decorated with Nobel Peace Prize 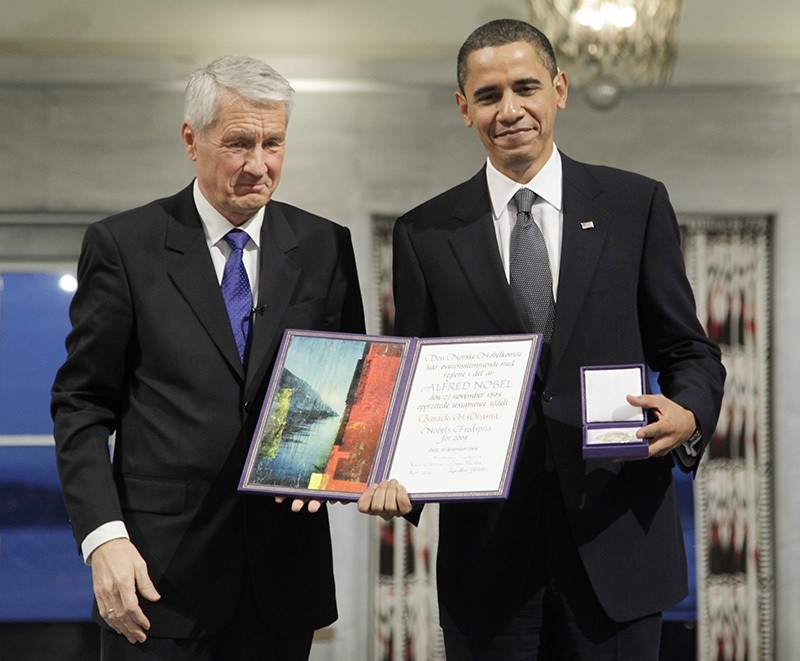 Seven years ago this week, when a young American president learned he'd been awarded the Nobel Peace Prize barely nine months into his first term — arguably before he'd made any peace — a somewhat embarrassed Barack Obama asked his aides to write an acceptance speech that addressed the awkwardness of the award.

But by the time his speechwriters delivered a draft, Obama's focus had shifted to another source of tension in his upcoming moment in Oslo: He would deliver this speech about peace just days after he planned to order 30,000 more American troops into battle in Afghanistan.

The president all but scrapped the draft and wrote his own version.

The speech Obama delivered — a Nobel Peace Prize lecture about the necessity of waging war — now looks like an early sign that the American president would not be the sort of peacemaker the European intellectuals of the Nobel committee had anticipated.

On matters of war and peace, Obama has proven to be a confounding and contradictory figure, one who stands to leave behind both devastating and pressing failures, as well as a set of fresh accomplishments whose impact could resonate for decades.

He is the erstwhile anti-war candidate, now engaged in more theaters of war than his predecessor. He is the commander-in-chief who pulled more than a hundred thousand U.S. troops out of harm's way in Iraq, but also began a slow trickle back in. He recoiled against full-scale, conventional war, while embracing the brave new world of drone attacks and proxy battles. He has championed diplomacy on climate change and nuclear proliferation and has torn down walls to Cuba and Myanmar, but has also failed repeatedly to broker a lasting pause to more than six years of slaughter in Syria.

If there was consensus Obama had not yet earned his Nobel Peace Prize when he received it in 2009, there's little such agreement on whether he deserves it today.

"I don't think he would have been in the speculation of the Nobel committee now, in 2016, even if he had not already won," said Kristian Berg Harpviken, director of the Peace Research Institute of Oslo, and a close watcher of the Nobel committee. Harpviken said he views Obama's foreign policy as more conventional and limited than he expected, particularly when it comes to using multilateral cooperation and institutions.

When it comes to finding new instruments for peace, he said, "Obama has been stuck in the old paradigm."

In many respects, Obama's tenure has been a seven-year debate over whether the president has used the tools of war to try to make peace too much or little.

Obama has been sharply criticized for his refusal to use force to depose Bashar Assad, cripple his air force or more aggressively engage in diplomatic efforts to end the fighting. Many view Obama's policies as an unfortunate overcorrection from the George W. Bush-era Iraq war.

"The president correctly wanted to move away from the maximalist approach of the previous administration, but in doing so he went to a minimalist, gradualist and proxy approach that is prolonging the war. Where is the justice in that?" said Ret. Lt. Gen. Jim Dubik, a senior fellow at the Institute for the Study of War and the author of the book, "Just War Reconsider." Obama should have worked harder to rally a coalition around a shared vision of a stable Middle East, he said.

The president's advisers dismiss such critiques as a misguided presumption that more force yields more peace. Cold-eyed assessments of the options in Syria show no certainty of outcomes.

"In Syria, there is no international basis to go to war against the Assad regime. Similarly, there's no clearly articulable objective as to how it would play out. What is the end that we're seeking militarily? " said deputy national security adviser Ben Rhodes. "The president doesn't believe you can impose order through military force alone."

But Obama has in many other cases been willing to use limited force to achieve limited objectives, even risking unintended consequences.

He has ordered drone strikes in Pakistan, Yemen, Libya, Somalia and Syria, actions that that have killed civilians and sparked tension in those countries and across the international community. What began as a secret program has become more transparent and Obama has aimed to leave legal limits for his predecessor on the use of unmanned warplanes.

But he has left unanswered the question of how or when those actions will lead to peace, some argued.

Looking back on his Nobel speech, that dilemma was already there, said Jon Alterman, a Middle East expert and former State Department official.

"What's strikes me most is how different our concept of war was seven years ago," he said. "We are engaged in a whole series of infinitely sustainable, low-level actions that have no logical endpoint. When do we stop doing drone attacks in Yemen and Pakistan? What level of terrorism is acceptable? ... We're engaged in battles with a whole range of groups that are never going to surrender, so how do you decide to stop it? How do you decide what winning looks like?"