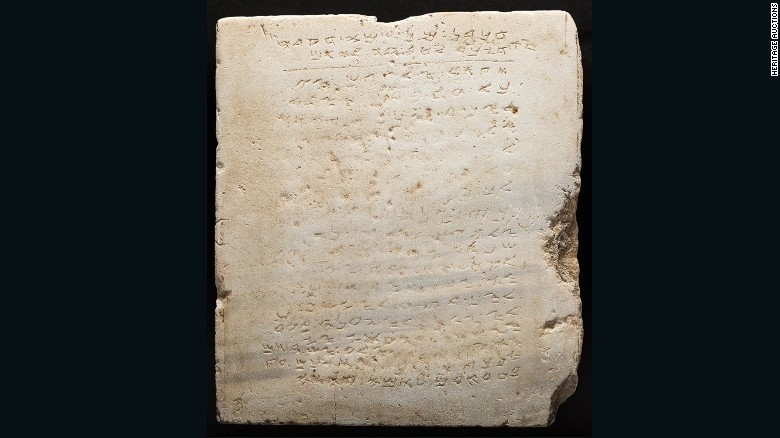 | Heritage Auctions Photo
by Nov 17, 2016 12:00 am
A stone inscription of the Ten Commandments that could date to 300-500 AD sold at auction Wednesday in Beverly Hills for 850,000 dollars, the auction house Heritage Auctions, said.

The winning bidder did "not choose to be identified at this time," Bradley said.

Heritage Auctions antiquities director David Michaels called the marble tablet, one of the oldest known inscriptions of the Old Testament rules in stone, "a piece of religious history."

"It shows that these Ten Commandments were literally ... set in stone very early," he said.

Carved in the early Hebrew script of the Samaritans, an ancient minority group whose faith had common roots with Judaism, the tablet is believed to have once hung on a temple wall in what is now Israel.

The slab was first unearthed in railroad works near the town of Yavneh in what was then Palestine in 1913, and was used as a paving stone in a private courtyard for 30 years.

A visiting archeologist, Jacob Kaplan, acquired it in 1943, and published the first scholarly article about it with Yitzhak Ben-Zvi, who would go on to become Israel's president from 1952-1963, Michaels said.

The tablet is designated an Israeli "national treasure." As a condition of the sale Israel will require the new owner to put the tablet on public display.

Proceeds from the auction will benefit the Living Torah Jewish museum in Brooklyn, New York, which has owned the tablet since 2005.

Although the tablet's 20 lines list 10 "thou shalt not..." commandments, only nine of them will be familiar to modern readers.

The Samaritan version of the holy rulebook proscribes murder, theft and graven images, but skips a ban on taking the lord's name in vain.

Instead, the inscription commands the faithful to worship their god on the Samaritans' holy Mount Gerizim, near the modern-day West Bank city of Nablus.

The oldest known written record of the Ten Commandments is on the Dead Sea Scrolls, ancient fragments of parchment and papyrus dating to between 30-1 BCE that were discovered in the Judean Desert in 1947.
Last Update: Nov 17, 2016 11:36 am
RELATED TOPICS