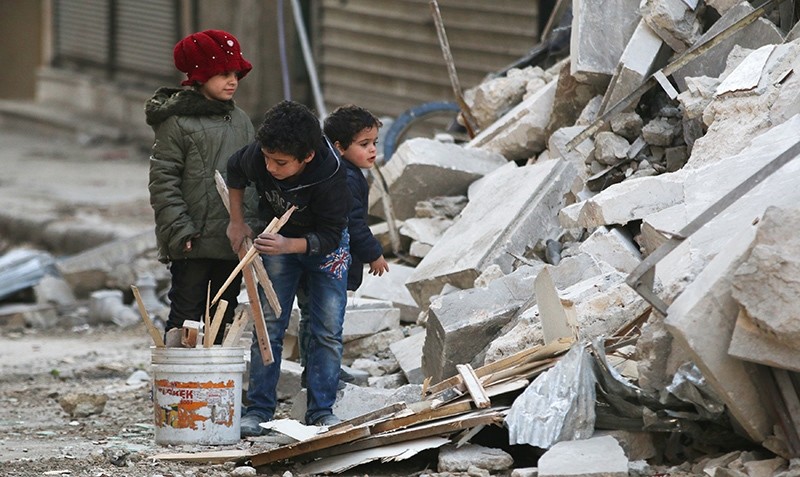 Children collect firewood amid damage and debris at a site hit yesterday by airstrikes in the rebel held al-Shaar neighbourhood of Aleppo, Syria November 17, 2016 (Reuters Photo)
by Associated Press Dec 05, 2016 12:00 am

The U.N.'s humanitarian aid coordination agency says it and partners require a record $22.2 billion next year to help people hit by conflict and disasters around the world, a 10 percent increase from the appeal for this year with war and disease wracking countries like Syria, Yemen and South Sudan.

More than one-third of the total expected need, or $8.1 billion, projected by OCHA aims to help people in Syria and refugees from it. Overall, the appeal announced Monday from the Office of Coordination of Humanitarian Affairs seeks to help nearly 93 million people either in 33 countries — nearly two-thirds of them in Africa.

It is the highest amount the agency has ever requested, OCHA chief Stephen O'Brien.

"This is a reflection of a state of humanitarian need in the world not witnessed since the Second World War — more than 128 million people urgently need our support and solidarity to survive and live in safety and dignity."

"More than 80 percent of the needs stem from man-made conflicts, many of which are now protracted and push up demand for relief year after year," O'Brien told reporters in Geneva.

Appeals like the "Global Humanitarian Response" generally fall short of their targets and are based on estimations, but set important benchmarks for need around the world.

OCHA said conflicts including those in Yemen, Syria, South Sudan and Nigeria were the main driver of the appeal. But it said in a statement that droughts from natural catastrophes and phenomena like El Nino "is pushing vulnerable communities to the brink of survival."