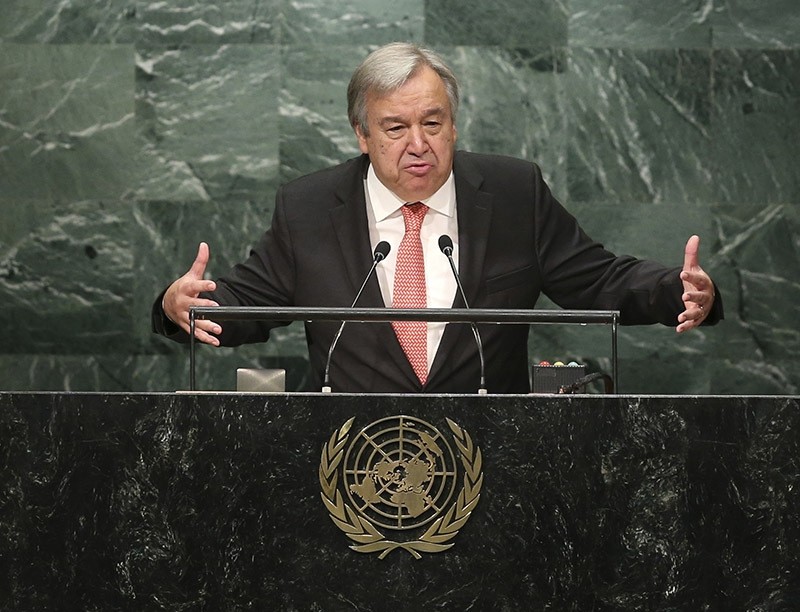 In this Oct. 13, 2016 file photo, Antonio Guterres of Portugal, Secretary-General designate of the United Nations, speaks during his appointment at U.N. headquarters. (AP Photo)
by Compiled from Wire Services Jan 01, 2017 12:00 am

Antonio Guterres painted a dark picture of global politics on his first day as the new UN secretary general on Sunday, as he took the reins from Ban Ki-moon with a new year's resolution to put peace first.

"Civilians are pounded with deadly force. Women, children and men are killed and injured, forced from their homes, dispossessed and destitute. Even hospitals and aid convoys are targeted," Guterres said in a statement.

"Let us make 2017 a year for peace," said Guterres, who takes over for a term of five years from current UN chief Ban Ki-moon, who had been at the helm of the world body for the past decade.

The former Portuguese prime minister said "all that we strive for as a human family" depended on peace, but also cautioned that "peace depends on us."

Guterres has previously noted that he is taking over the post as people around the world lose confidence in leaders and institutions, including the United Nations.

He says he intends to focus on three strategic areas where change is needed: building and maintaining peace; achieving sustainable development; and reforming the UN's internal workings.

Guterres is set to take office and address his colleagues at the UN on Tuesday, after a holiday in the US on Monday.

He won the U.N.'s top job after receiving high marks from almost every diplomat for his performance in the first-ever question-and-answer sessions in the General Assembly for the 13 candidates vying to replace Ban, whose second five-year term ended at midnight on Dec. 31.

In an interview during his campaign with three journalists, Guterres said the role of secretary-general should be "an honest broker, a consensus builder" who engages as much as possible, in many circumstances discreetly.

Guterres also wants to reform the United Nations to make it "nimble, efficient and effective." He said "it must focus more on delivery and less on process, more on people and less on bureaucracy," and ensure that the more than 85,000 U.N. staff working in 180 countries are being used effectively.