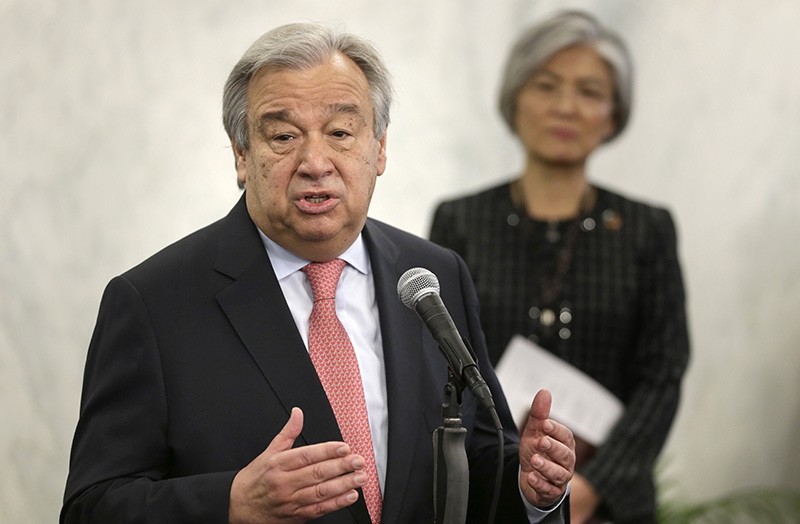 The new U.N. secretary-general said Tuesday he's "no miracle maker" but Antonio Guterres has big ambitions: He wants to shake up the global body and get all 193 member nations to come together to solve the "terrible problems" the world is facing.

Speaking on his first day at U.N. headquarters after taking the organization's reins from Ban Ki-moon, Guterres said conflicts are multiplying and interlinked, and have triggered "this new phenomenon of global terrorism."

At the same time, he said, there are massive human rights violations and inequalities "have grown quite dramatically."

In a world which has become globalized and interconnected, Guterres said exclusion is "even more unbearable because people now can see how others live, can see the prosperity in other parts of the world." And "that more easily triggers revolt, anger, and becomes a factor in the instability" of conflicts, he said.

The former Portuguese prime minister and U.N. refugee chief said "only global solutions can address global problems, and the U.N. is the cornerstone of that multilateral approach."

But Guterres said this belief isn't shared by many people around the world, pointing to the growing divide between the public and governments and political establishments in many countries.

"We also see in relation to international organizations like the U.N. a lot of resistance in many parts of the world," Guterres said. "There's a lot of skepticism about the role the U.N. can play."

One such skeptic, U.S. President-elect Donald Trump, questioned the United Nations' effectiveness after the Obama administration allowed the U.N. Security Council to condemn Israeli settlements in the West Bank on Dec. 23 in a stunning rupture with past practice.

"The United Nations has such great potential but right now it is just a club for people to get together, talk and have a good time. So sad!," Trump tweeted on Dec. 26.

Guterres, asked whether he was concerned about the "good time" remark, replied "no." But he said he is concerned about "all the terrible problems we face in the world" and "I hope that we will all be able to come together to solve these problems."

This has proven impossible in the past, with Syria the most visible example.

Trump has also shown little interest in multilateralism and great attachment to an "America First" agenda.

The new secretary-general told several hundred U.N. staff and diplomats at a welcome ceremony that it's very important to be proud of what the United Nations has done to help millions of people.

But he said it's also crucial to recognize the U.N.'s shortcomings and failures and "to recognize situations where we are not able to deliver as we should for the people we care for."

Guterres said the United Nations needs to be able to respond to the aspirations, concerns and anxieties of people around the world — "and let's be honest, we are not yet entirely ready to do it properly."

He called for reform and "collective engagement" to address the U.N.'s shortcomings, pointing to its failure to prevent and resolve conflicts; difficulties in recognizing that peace, security, development and human rights must be tackled together; and getting rid of the "straitjacket of bureaucracy that makes our life so difficult in many of the things we do."

Guterres won the U.N.'s top job after receiving high marks from almost every diplomat for his performance in the first-ever question-and-answer sessions in the General Assembly for the 13 candidates vying to replace Ban, whose second five-year term ended on Dec. 31.

Referring to the expectations that his election generated, Guterres said: "I think it's useful to say that there are no miracles, and I'm sure I am no miracle maker, and the only way for us to be able to achieve our goals is to really work together as a team."