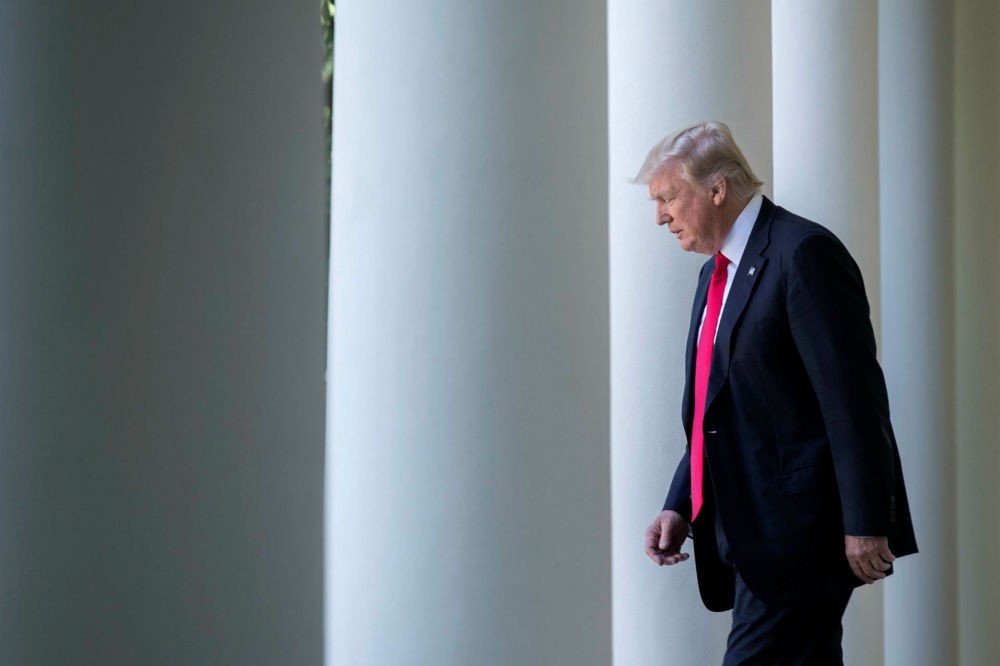 U.S. President Donald Trump walks from the Oval Office to announce the country's withdrawal from the Paris climate accord at the White House in Washington, DC, June 1.
by Angelos Berberakis Jun 03, 2017 12:00 am

Amid a global outcry, President Donald Trump made a lengthy statement in which he explained why he thought that the Paris deal was not only ‘unfair' for the U.S. but would ultimately fail to live up to expectations

Rumors of an American withdrawal from the 2015 Paris Climate Agreement had already been raging ever since Donald Trump took office, since he had said on the campaign trail that he would withdraw and renegotiate on a "one to one" level any deal that was unfair to the United States and undermined the American economy, or made it look weak on the world stage.

Now the world is reacting badly, and protests across the western world against Trump are almost bound to be held at this point.

The Canadian and British prime ministers, Justin Trudeau and Theresa May respectively, expressed their disagreement with Trump, with Trudeau saying that Canada was "deeply disappointed," while May accused him of harming the "prosperity and security of future generations." French President Emannuel Macron believes that this was a "mistake both for the U.S. and for our planet" but said he respected President Trump's decision.

European countries also released joint statements expressing their disagreement. The Chinese foreign ministry stated that the accord participants "should cherish this hard-won outcome." The Paris Climate Agreement aims to keep global temperatures not only from rising, but also to make them drop close to pre-industrial levels. With or without U.S. participation however, research suggests that these goals would not have been met even by 2100.

The accord also aims to curb man-made greenhouse gas emissions to levels that the forests and oceans of the world can naturally absorb, however there is almost zero effort outside the western world to prevent the pollution of the oceans and deforestation, with third world nations being the worst offenders.

One of the most significant reasons for the Americans exiting the deal though is the fact that it sees the developed world paying "billions and billions of dollars" to the developing world, so that they may, in theory, start meeting their energy needs in a more environmentally friendly manner; there are significant concerns however that the money will not actually make it to help the environment, but will be squandered by the various warlords, drug lords and quasi-dictators of the third world.

Trump's biggest selling point during the election, though, was jobs. So far, under President Trump, over half a million new, mostly industrial jobs have been created in the U.S., but the White House feared that under the Paris accord, the U.S. economy would lose 6.5 million industrial sector jobs, including 3.1 million manufacturing sector jobs by 2040.

The White House also says the accord imposed "unrealistic targets on the U.S. for reducing carbon emissions while giving China a free pass." Indeed, according to research from the Massachusetts Institute of Technology, even "if every member nation met all of their commitments though this century, the impact on climate would be negligible," speaking in numbers it would only reduce temperatures by 2/10ths of one degree Celsius by 2100, hinting that more drastic measures need to be taken.

"Fourteen days of emissions from China alone would wipe out the gains of America's expected reductions in the in 2030, even after we'd have to spend billions and billions of dollars, lost jobs, closed factories and suffered much higher energy costs for our businesses and for our homes."

Furthermore, the U.S. government calculates that the cost to the economy by 2040, had the U.S. decided to follow the Paris accord, would be nearing $3 trillion in lost GDP, as well as reducing overall household wealth by $7,000.

President Trump has been widely accused of being a climate change denialist because he does not fully subscribe to the entire theory and puts more weight on the importance of pollution. In his own words, "Not only does this deal subject our citizens to harsh economic restrictions, it fails to live up to our environmental ideals."

This deal "punishes the U.S., the world's leader in environmental protection, while imposing no meaningful obligations on the world's leading polluters. For example, under the agreement, China will be able to increase these emissions by a staggering number of years, 13. They can do whatever they want for 13 years, not us. India makes its participation contingent on receiving billions and billions of dollars in foreign aid from developed countries. […] and effectively the agreement blocks the development of clean coal in America."

China and India however, who together account for close to 3 billion of the Earth's population, are allowed to increase their coal production, with China building hundreds of coal energy factories and India willing to double its coal production by 2020.