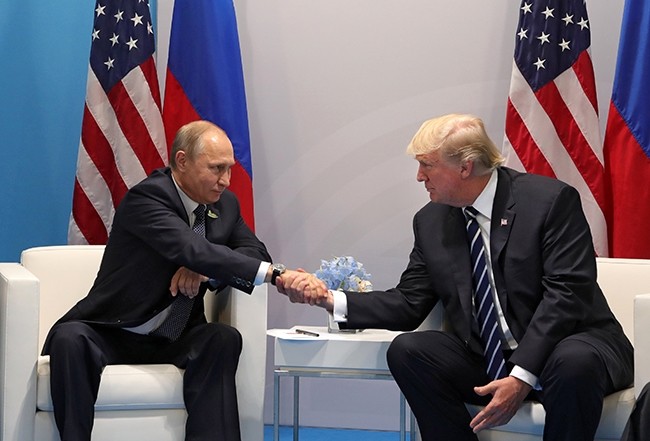 Russian President Vladimir Putin (L) and US President Donald J. Trump (R) shake hands during their meeting on the sidelines of the G20 summit in Hamburg, Germany, 07 July 2017. (EPA Photo)
by Compiled from Wire Services Jul 07, 2017 12:00 am

Russian President Vladimir Putin denied his country's interference in the US presidential elections when asked during his first face-to-face meeting with US President Donald Trump, which lasted for more than two hours.

Trump raised the matter directly with Putin at the start of their first face-to-face talks, US Secretary of State Rex Tillerson told reporters as he provided details after the leaders talked for more than two hours.

The White House had earlier been mum about whether the matter would be raised. Trump on Thursday had repeated his past assertions that, though Russia was likely behind the hacking attacks, other nations could also have been involved.

US intelligence agencies have asserted that Russia was behind the meddling, which stands at the centre of an ongoing US probe whose focus has also turned to possible collusion between Trump's campaign and Russian officials.

After the talks Putin said that the two presidents discussed "Ukraine, Syria, and other bilateral problems," before eventually returning to the "problems of fighting terrorism and cybersecurity."

With broad grins and a warm handshake, President Donald Trump and Russian President Vladimir Putin warmed up for their historic encounter on the sidelines of Group of 20 summit in northern German city of Hamburg under the shadow of U.S. outrage about Russian election-meddling and nagging questions about potential Trump campaign collusion.

Ahead of a formal, sit-down meeting, Trump and Putin were seen exchanging pleasantries as a leaders' retreat got under way. As officials gathered around a table, Trump outstretched his hand to Putin and then patted his elbow and both men smiled. A brief video clip shows Trump casually patting Putin on the back as they stand side by side.

Video of the brief exchange was posted to Facebook by the German Cabinet. It was the first known in-person interaction between the two men, who have spoken by telephone since Trump was inaugurated in January.

The two leaders planned later Friday to hold longer talks on Syria and other issues on the sidelines of the G20 summit of industrialized and developing nations. The White House said it has scheduled 35 minutes for the meeting.

"Much to discuss," Trump tweeted in advance of the encounter.

The heavily anticipated meeting is being closely scrutinized for signs of how friendly a rapport Trump and Putin will have. Trump's predecessor, President Barack Obama, had notoriously strained ties to Putin, and Trump has expressed an interest in a better U.S.-Russia relationship. But deep skepticism about Russia in the U.S. and ongoing investigations into whether Trump's campaign coordinated with Moscow during last year's election have made a U.S.-Russia detente politically risky for Trump.

As leaders gathered at a summit hall in Hamburg for a group photo, Trump and Putin stood on opposite sides of the tableau. Putin chatted casually with German Chancellor Angela Merkel before taking his spot for the photo next to Turkish President Recep Tayyip Erdoğan. After the cameras snapped away, Merkel, in the center, dismissed the group with a firm nod of the head.

In the lead-up to the meeting, Trump, during a speech in Warsaw on Thursday, urged Russia to "cease its destabilizing activities in Ukraine and elsewhere and its support for hostile regimes — including Syria and Iran — and to instead join the community of responsible nations in our fight against common enemies and in defense of civilization itself."

But much of the focus — both in Washington and Moscow — will be on whether Trump broaches the issue of Russia's meddling in the election.

During a news conference in Poland on Thursday, Trump again refused to accept the conclusion by multiple U.S. intelligence agencies that Russia interfered to try to help Trump win last November. Trump said it could have been Russia, but that other countries could have meddled, too.

"Nobody really knows for sure," Trump said.

U.S. lawmakers and federal investigators continue to look into Russia's election interference, along with possible collusion between Trump campaign associates and Russian government officials. That puts Trump under intense scrutiny over how he handles the sit-down with Putin, a former Russian intelligence agent known to come to meetings like this well-prepared.

Trump, who likes to have neatly packaged achievements to pair with high-profile meetings, may seek some concessions from Russia to show he's delivering progress and helping restore a once-productive relationship that he recently described as being at an "all-time low." Putin would almost certainly want something in return.

The list of issues ranges from Syria to Iran to Ukraine, and now North Korea, following Pyongyang's test this week of a missile capable of striking the U.S.

Russia wants the U.S. to return the two compounds in New York and Maryland that were seized by the Obama administration as punishment for election meddling. It also wants the U.S. to ease sanctions it imposed on Russia after Putin annexed the Crimean Peninsula, and over Russia's support of separatist elements in Ukraine.

The U.S. wants a resumption of adoptions of Russian children by American parents, which Russia banned in 2012, along with an end to what it claims is intensifying harassment of U.S. diplomats and other officials stationed in Russia.

Lawmakers in both political parties say Trump must confront Putin over the election.

Several senior Democratic U.S. senators served notice Thursday that Trump would be in "severe dereliction" of his presidential duty if he fails to confront Putin over the issue, telling Trump in a letter that he must make clear that Russia's interference in U.S. democracy will not be tolerated.

"The upcoming elections cannot be a playground for President Putin," said Minority Leader Chuck Schumer of New York; Dick Durbin of Illinois, the Senate's No. 2 Democrat; and the top Democrats on the Intelligence, Armed Services, and Foreign Relations committees.

Rep. Adam Kinzinger, R-Ill., a member of the House Foreign Affairs Committee, said this week that he will "raise holy hell" if Trump goes soft on Putin. "It is very important for us to make a statement that Russia does not meddle not just in our elections, here and the future, but in our allies,'" he said.

Every detail of the Trump-Putin meeting will be scrutinized, from their facial expressions to the color of their neckties to how they shake hands.

"The big thing to watch will be what Putin asks for and what he offers in return and whether there's a sense of receptivity on the president's part," said Derek Chollet, executive vice president and senior adviser for security and defense policy at the German Marshall Fund, a Washington think tank.

Before Putin, Trump will try to manage another rocky international relationship when he meets with Mexican President Enrique Pena Nieto.

Pena Nieto had been scheduled to visit the White House shortly after Trump took office, but he scrapped the trip at the last minute due to disagreement with Trump over the U.S. president's insistence that Mexico pay for the wall he has vowed to build along the U.S.-Mexico border to deter illegal immigration. Pena Nieto insists Mexico will not pay.

Trump has vowed to tighten border security and crack down on undocumented workers and drug cartels, but he has been less firm on getting Mexico to pay for the wall.

He reassured Pena Nieto in April that he would not pull out of the North American Free Trade Agreement, which involves the U.S., Mexico and Canada. But Trump said he could still withdraw if he concludes that a renegotiated pact would not produce "a fair deal" for all sides.

The Putin meeting is the highlight of a hectic, four-day European visit for Trump, who addressed thousands of Poles in an outdoor speech in Warsaw, Poland, on Thursday. He met in Germany with
Last Update: Jul 07, 2017 8:53 pm
RELATED TOPICS