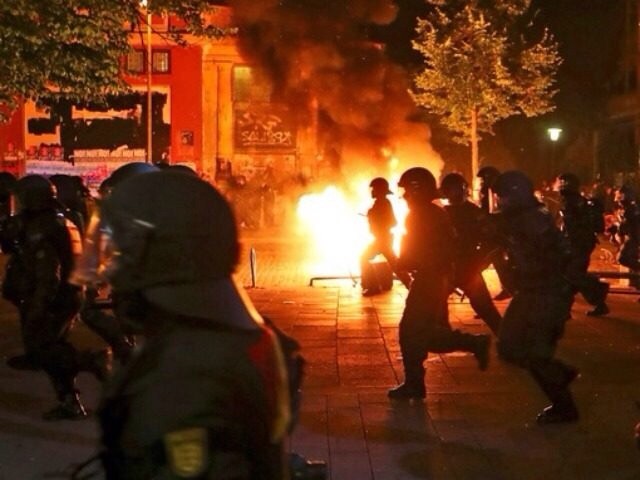 German authorities have sent heavily armed special forces to the streets of Hamburg after police forces failed to contain demonstrators protesting against the Group of 20 on Saturday.

Anti-globalization protesters set dozens of cars ablaze and tried to block national delegations from entering the G20 summit Friday as the meeting got underway in the German port city of Hamburg. Responding to a second day of protests, police ordered in several hundred more officers from across the country.

German police asked media outlets and individuals not to share the actions of security officers in Hamburg in a statement shared on Twitter.

Chief reporter of the German daily Bild said in a tweet that police officers were selectively targeting journalists, and were telling "No more press freedom from now on, get lost or go to the hospital!"

The videos and photos from the scene showed that scores of PKK and its affiliate YPG militants, as well as followers of the far-left DEV-YOL (Revolutionary Path) group participated heavily in the violent protests, terrorizing and setting the streets of Hamburg on fire.

Germany-backed YPG/PKK terrorists threaten to burn the streets of Germany, Turkey in a video from 2016#G20HH2017https://t.co/gs3U59RB2c pic.twitter.com/3s8sqAZa9S

In an earlier video from 2016, YPG/PKK terrorists urged its supporters to set ablaze the streets which display scenes of cooperation between Germany and Turkey.

Hundreds of officers built moving lines in different parts of Hamburg and used water cannons to force away protesters from streets across the city. Some were physically moved for hundreds of meters from a protest sit-in in front of the first security checkpoint near the summit grounds.

Police later tweeted that all the world leaders attending the summit made it safely to the city's convention center, where the event is taking place. None of the activists who took to the streets to protest globalization, economic inequality and what they see as inaction on climate change managed to push into the no-go zone police established around the gathering.

The leaders, including host German Chancellor Angela Merkel, U.S. President Donald Trump, Russian President Vladimir Putin and many others, were to discuss issues such as fighting international terrorism, but also to tackle more contentious topics such as climate change and international trade.

Early Friday, activists shot firecrackers at a police helicopter and only narrowly missed it, police said. Windows at the Mongolian consulate were also broken and the tires of a car belonging to the Canadian delegation were punctured.

Skirmishes and small clashes took place across the city as protesters roamed around. Later in the day, masked demonstrators put up barricades in the city's Altona neighborhood and threw gasoline bombs at police.

Anti-globalization protesters also kept U.S. first lady Melania Trump from joining the spouses of the other world leaders at the summit.

The first lady's spokeswoman, Stephanie Grisham, said that because of the demonstrators, Hamburg police had not cleared Melania Trump to leave the government guest house where she and the president spent the night. Hamburg police did not confirm the account.

The first lady tweeted that she was thinking of those who were hurt during protests that began Thursday.

"Hope everyone stay safe!" she wrote.

Hamburg police, who already have 20,000 officers on hand to patrol the city's streets, skies and waterways, demanded reinforcement from police around the country.

"We've asked for a few hundreds more police officers — they're on the way," Andy Grote, the city's interior senator, told reporters. "The potential for criminal energy and violence of some is shocking."

Grote said that some activists were directly attacking officers and that 45 protesters were detained and another 15 were temporarily taken into custody. So far, 160 police officers were hurt, most of them slightly, but some also had to be taken to the hospital — one of whom had an eye injury after a firework exploded in front of him.

Hamburg police also posted a photo on Twitter showing the bloody wound of a police officer they said was injured by slingshot catapults.

Kathleen Mueller, a 56-year-old protester from Potsdam near Berlin, criticized police for what she said were "brutal responses" to overwhelmingly peaceful demonstrations.

Mueller said she would come to Hamburg to stop rampant consumerism and to tell leaders that "we need to ... rethink our economic systems." She said she saw riot police wrenching apart a peaceful human chain and dragging people off.

"They didn't have to do that, there was no resistance, it was just to cause pain and it shouldn't happen," said Mueller, who was participating in a protest of some 300 people in a park near the summit grounds.

Hamburg resident Kürşat Bayazıt, 42, expressed frustrations with both the summit and the demonstrations, which kept him from going to work as a landscaper.

"Yesterday, there were big problems," Bayazıt said, while taking a stroll with his 2-year-old daughter in the St. Pauli neighborhood that had seen heavy clashes Thursday night.

He pointed across the street to a large, burned-out garbage can with an empty fire extinguisher lying nearby and the pungent smell of smoke still in the air.

"They burned that garbage can and in other places cars, it really scared my daughter," Bayazıt said, expressing his frustrations.

However, not all St. Pauli residents seemed to share Bayazıt's frustration regarding the chaos overtaking the city during the G-20 summit.

Few had their stores and homes boarded up and some residents seemed to be welcoming the protesters. Some were sitting in coffee shops, three young men were listening to Reggae music on their balcony and wearing anti-summit T-shirts while a few buildings further down the street, a banner hung from a window saying "granny and grandpa are against G-20" and "G-20 - go get beer."

Some bars had put up signs saying, "protesters welcome" and late Thursday, prostitutes on the city's famous Reeperbahn amusement strip could be seen dancing to the music of the activists and giving a thumbs-up to those passing by.