US could send arms to Ukraine to change Russia’s approach, envoy says 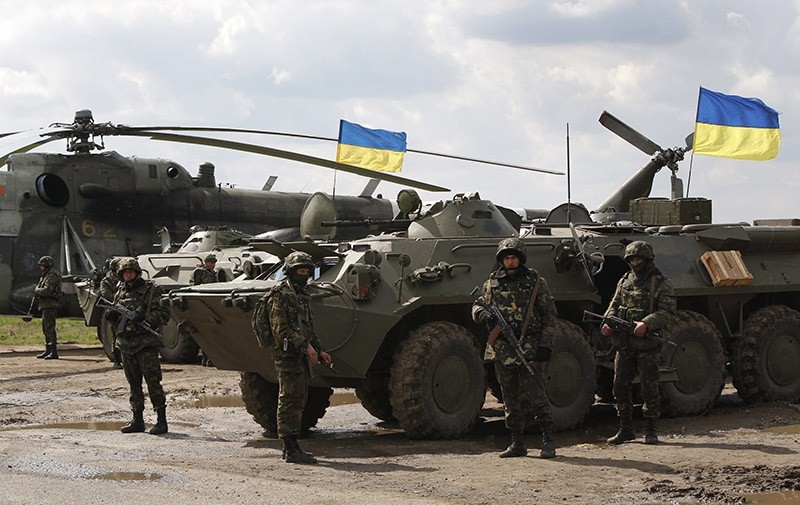 Ukrainian soldiers stand at APCs, with Ukrainian flags in the back, as Ukrainian army troops receive ammunition in a field on the outskirts of Izyum, Eastern Ukraine, Tuesday, April 15, 2014. (AP Photo)
by Daily Sabah Jul 25, 2017 12:00 am

According to Volker, a former U.S. ambassador to NATO who was appointed to his current role July 7, supplying Ukraine with weapons could change Moscow's approach to the conflict.

"Defensive weapons, ones that would allow Ukraine to defend itself, and to take out tanks for example, would actually help [to stop Russia threatening Ukraine]," Volker told BBC in an interview.

The envoy added that he was not predicting that the U.S. would provide the weaponry, but that it would be discussed and decided upon.

"I think the argument that it would be provocative to Russia or emboldening of Ukraine is just getting it backwards," he said.

Volker also said that "a new strategic dialogue" with the Kremlin was necessary for success in establishing peace in eastern Ukraine, where violence has escalated recently.

Five Ukrainian soldiers were killed by heavy shelling last week. The U.S. condemned the outbreak of violence, calling it "the deadliest one-day period in 2017" in the Ukrainian conflict. Washington also blamed the "Russian-led" separatists for the escalation, and urged the Russia-supported troops to abide by the terms of a cease-fire deal for eastern Ukraine that was signed in early 2015 but never fully implemented.

Following the incident, Volker blamed Russian aggression for violence in eastern Ukraine, where people are dying in what should be seen as a "hot war" rather than a "frozen conflict."

According to the U.N., more than 10,000 people have died since the eastern Ukraine conflict erupted in April 2014, soon after Russia annexed Ukraine's Crimean peninsula. The fighting has displaced more than 1.6 million people.