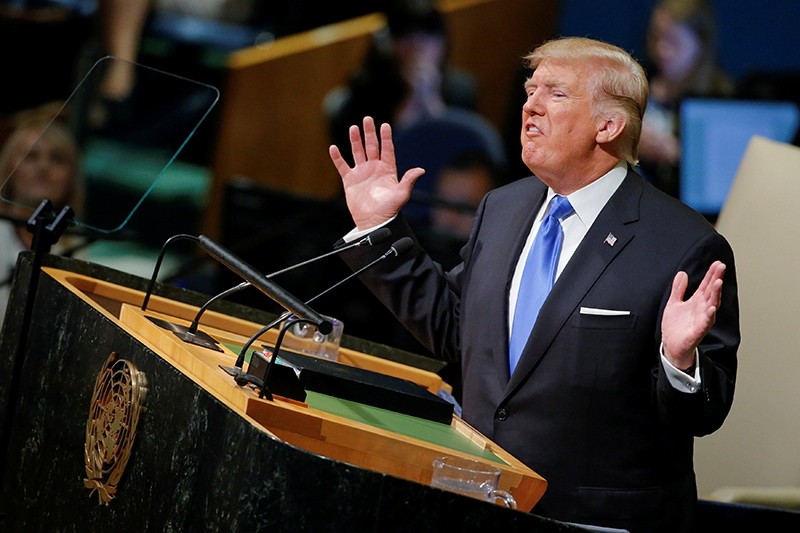 President Donald Trump urged world leaders Tuesday to help restore "democracy and political freedoms" in Venezuela, singling out the South American country for some of his most blistering criticism in a speech to the United Nations.

Venezuelan President Nicolas Maduro hit back by calling the U.S. president "the new Hitler" of international politics. He also accused Trump of threatening to assassinate him, even though Trump did no such thing.

Trump threatened to build upon sweeping economic sanctions that the U.S. slapped on Venezuela last month if Maduro "persists on a path to impose authoritarian rule."

But he did not repeat an earlier threat to consider military options to pressure Venezuela, a day after dining with the leaders of four Latin American countries who made clear they would not support such action.

"The Venezuelan people are starving and their country is collapsing. Their democratic institutions are being destroyed. This situation is completely unacceptable and we cannot stand by and watch," Trump said. "I ask every country represented here today to be prepared to do more to address this very real crisis."

Maduro, who did not attend the U.N. General Assembly gathering, reacted angrily from Caracas, calling the speech an "aggression from the new Hitler of international politics, Mr. Donald Trump, against the people of Venezuela."

Maduro added that as he understood the speech, "Donald Trump today threatened the president of the Bolivarian Republican of Venezuela with death."

However, Trump only said that the U.S. is "prepared to take further action" against Venezuela.

"Fake empathy for Iranians fools no one," he added.

In his maiden speech to the U.N. General Assembly, Trump branded Iran a "corrupt dictatorship" and "rogue state" and said the "longest-suffering victims of Iran's leaders are, in fact, its own people."

Trump said the nuclear deal that Zarif negotiated in close cooperation with former U.S. secretary of state John Kerry was "an embarrassment to the United States."

The U.S. president accused Tehran of using its wealth to prop up the Assad regime, back rebels in Yemen and "undermine peace throughout the entire Middle East."

Trump appeared to pave the way towards tearing up the nuclear deal signed in 2015 between six world powers and Iran.

"We cannot let a murderous regime continue these destabilizing activities while building dangerous missiles, and we cannot abide by an agreement if it provides cover for the eventual construction of a nuclear program," he said.