Russia's Lavrov suggests diplomatic 'tit-for-tat' with US could end 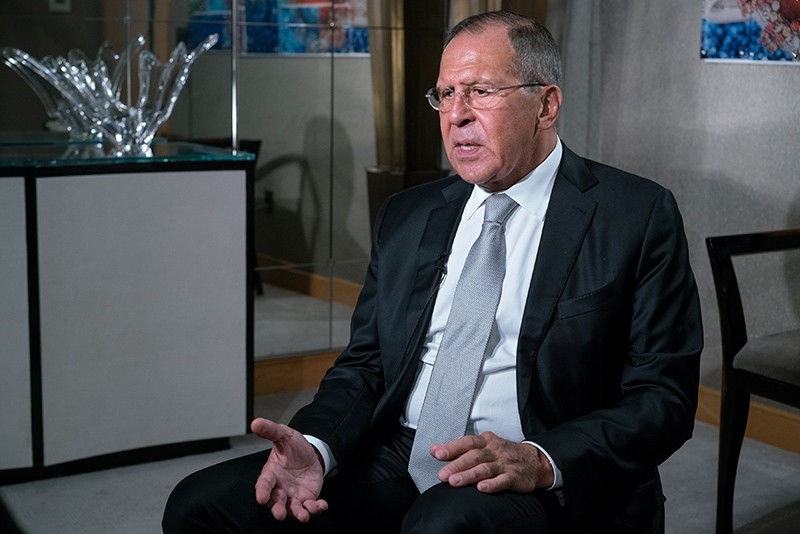 Russian Foreign Minister Sergey Lavrov told The Associated Press in an interview Tuesday that he heard positive news in President Donald Trump's United Nations address: "that the U.S. would not impose its way of life on others."

"I think it's a very welcome statement, which we haven't heard from an American leader for a very long time," said Lavrov, who sat down with the AP and Russia's Tass news agency directly after meeting with U.S. Secretary of State Rex Tillerson.

Lavrov blamed the Obama administration for the collapse in relations between Moscow and Washington. The U.S. enacted a series of steps against the Russian and Russian diplomats in December, including new sanctions and expelling 35 Russian diplomats, to punish Russia for meddling in the U.S. elections, a charge Russia has denied. Moscow responded by limiting the size of the U.S. diplomatic staff in Russia.

In his speech to the General Assembly, Trump said "We do not seek to impose our way of life on anyone, but rather to let it shine as an example for everyone to watch." He also said, "Strong, sovereign nations let diverse countries with different values, different cultures, not just coexist, but work side by side on the basis of mutual respect."

Lavrov pointed to those statements while acknowledging relations are at "a very difficult and a very low point, which is the legacy of the Obama administration." But he said that what Trump had said during the election campaign, and what he continues to say now, is that he wants to have good relations with Moscow.

"What I feel, talking to Rex Tillerson, is that this is the position of the administration, that they are not happy with the current state of relations, and we are not happy at all," he said.

Lavrov said it would be "quite useful" for Trump and Putin to meet again in November during an Asian-Pacific summit scheduled in Danang, Vietnam, to review the progress in their bilateral relations. Talks are going on now among lower-ranking officials, he said, including the two countries' militaries and their security agencies. "The dialogue has been going on, it's not easy," Lavrov said.

At their first face-to-face meetings, Putin and Trump met several times in Hamburg, Germany, in July during the G-20 summit.

Lavrov also seemed to hint that the "tit-for-tat" series of ousters of diplomats from the two countries' embassies was over for now.

"We waited very long with our tit in response to Obama's tit," Lavrov said. "Being serious people and responsible people, and I feel Rex Tillerson is one of them, I hope that we can draw conclusions from where we are now and understand where we want to be."

He said that both Russia and the United States have to address the situation as it is, which he said was created by "the spiral of unfriendly steps started by the Obama administration," but still work like "responsible people" to address their bilateral ties as well as serious international issues.

Lavrov did not criticize Trump's threat to "totally destroy" North Korea if the U.S. is forced to defend itself from Pyongyang. He said Trump has spoken in the same vein many times. "We don't doubt that the United States has capacity to do something very destructive."

Trump and his campaign's relations with Russia have been under scrutiny from the beginning of his presidency, with federal and congressional investigators looking for any evidence of collusion between the campaign and Russian operatives, who allegedly hacked into Democratic Party emails last year and may have used fake identities to feed propaganda to U.S. voters over social media.

The Senate intelligence committee is one of several congressional panels investigating Russian interference, and special counsel Robert Mueller and his team are conducting their own criminal investigation.