US to withdraw from UN's culture, science and education body UNESCO in December 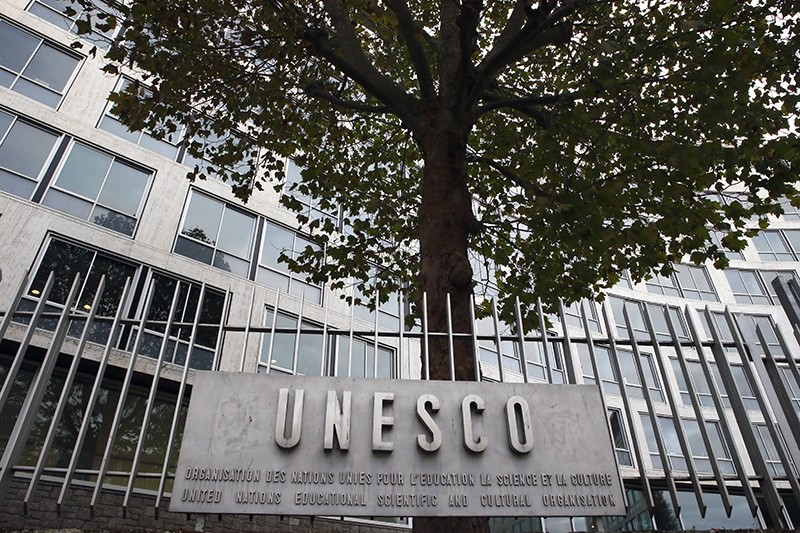 In this Monday Oct. 17, 2016 file picture, the United Nations Educational Scientific and Cultural Organization logo is pictured on the entrance at UNESCO's headquarters in Paris. (AP Photo)
by Compiled from Wire Services Oct 12, 2017 12:00 am

The United States plans to withdraw from UNESCO, the U.N.'s cultural and educational agency, diplomats said on Thursday, dealing a further blow to an organization hobbled by regional rivalries and a lack of funds.

"This decision was not taken lightly, and reflects U.S. concerns with mounting arrears at UNESCO, the need for fundamental reform in the organization, and continuing anti-Israel bias at UNESCO," the U.S. State department said in a statement, adding that the United States would seek to "remain engaged ...as a non-member observer state in order to contribute U.S. views, perspectives and expertise."

The decision will be effective December 31, the statement added.

Following the announcement, the UNESCO chief expressed regret over the U.S.' official decision to leave its organization.

"After receiving official notification by the United States Secretary of State, Mr Rex Tillerson, as UNESCO Director-General, I wish to express profound regret at the decision of the United States of America to withdraw from UNESCO," said UNESCO director general Irina Bokova in a statement.

Bokova added that the U.S. decision marked a loss for multilateralism and for the UN family.

The United States had cancelled its substantial budget contribution to UNESCO in 2011 in protest at a decision to grant the Palestinians full membership.

The United States, which has contributed around $80 million a year to UNESCO, accounting for around a fifth of its budget, still has a vote on the board and is expected to keep an observer status at the organization.

President Donald Trump has in general been critical of the United Nations and complained about the cost and value to the United States of some of its affiliate institutions.

"The absence of the United States or any large country with a lot of power is a loss. It's not just about money, it's promoting ideals that are vital to countries like the United States, such as education and culture," a UNESCO-based diplomat said.

For differing reasons, Britain, Japan and Brazil are among states that have yet to pay their dues for 2017.

After three days of secret balloting that could run until Friday, Qatar's Hamad bin Abdulaziz al-Kawari and France's Audrey Azoulay are tied to win the top post at the organization, with Egyptian hopeful Moushira Khattab in third. Two other candidates trail.

Voting lasts over a maximum five rounds. If the two finalists end level, they draw lots.

Paris-based UNESCO, which began work in 1946, is known for designating World Heritage sites such as the ancient city of Palmyra in Syria and the Grand Canyon National Park. It will pick a new chief this week to try to revive its fortunes.