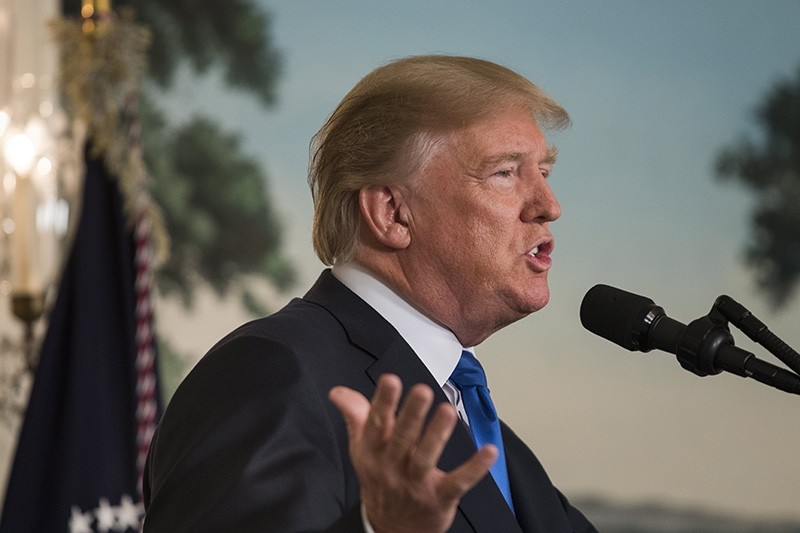 Following the speech, Iranian President Hassan Rouhani said his country "will continue to stick to" the nuclear deal, despite U.S. President Donald Trump's accusation that Tehran has violated the spirit of the 2015 nuclear deal.

Rouhani made the comments in a speech late Friday night aired on state television in Iran.

"Today the United States is more than ever opposed to the nuclear deal and more than ever against the Iranian people," he said in a televised address.

Rouhani called Trump's speech "a tissue of insults and baseless accusations" and dismissed the threat to tear up the deal with world powers.

"He has not studied international law. Can a president annul a multilateral international treaty on his own? Apparently he doesn't know that this agreement is not a bilateral agreement solely between Iran and the United States," he said.

Rouhani said the nuclear deal is "much stronger" than what Trump believes. He also talked about moments of historic tension between America and Iran.

Trump earlier Friday said he will not re-certify the Iran nuclear deal to Congress because the country is not living up to the spirit of the deal and has committed "multiple violations." Trump says that if Congress can't come up with new legislation, he will terminate the Obama-era pact.

Saudi Arabia also welcomed what it called Trump's "decisive strategy" towards Iran and said lifting sanctions had allowed Tehran to develop its ballistic missile program, step up its support for militant groups including Hezbollah and the Houthis in Yemen, and attack global shipping lanes.

The Riyadh government said in a statement it had supported the nuclear agreement, "but Iran took advantage of the economic gain from raising sanctions and used it to continue destabilizing the region".

It said it would continue to work with allies to achieve the goals announced by Trump and end Iran's "hostile activities".

Russia, on the other hand, said it was "extremely troubling" that Trump was raising questions that had been settled when the deal was signed.

Russian foreign ministry in a statement said that Moscow "underlines once again that it is unacceptable to use aggressive and threatening rhetoric" and that "using such methods to solve problems that touch fundamental security interests of other countries is bound to fail."

It said Russia reacts "with sadness" to Trump's decision to withdraw his support for the 2015 Iran nuclear deal, but said it expected the accord to be honoured nonetheless.

"We view (the decision) as an element of a domestic debate in the framework of U.S. national legislation," it said. "We expect that this step would not have a direct impact on the implementation of the deal."

Trump launched his tougher strategy earlier Friday to check Iran's "fanatical regime" but stopped short of withdrawing from the landmark nuclear deal, leaving the decision in the hands of the U.S. Congress.

The Russian statement insisted that the nuclear deal "has already contributed to strengthening international peace and security".

"Iran is strictly adhering to its responsibilities," the foreign ministry added.

"Russia remains committed to the Joint Comprehensive Plan of Action, is interested in keeping it and will continue to carry out its obligations. We call on the other parties to do the same."

Russian Deputy Foreign Minister Sergei Ryabkov was quoted as saying that Russia sees its main task now as preventing the Iran nuclear deal from collapsing. He called on all sides to stay committed to the deal.

European Union foreign policy chief Federica Mogherini responded that the Iran nuclear deal is a robust agreement that is working and cannot be terminated by any leader, including Trump.

Mogherini, who worked on behalf of major world powers to secure the deal, underlined that Trump cannot kill the deal, saying: "The president of the United States has many powers. Not this one."

She also told reporters that "there have been no violations of any of the commitments."

France, Britain and Germany issued a joint statement indicating their continued commitment to the deal, and concern of "possible implications" of Trump's decision not to support it. The countries' leaders asked U.S. administration and Congress to take into consideration the implications of the Iran decision on U.S. security and that of its allies.