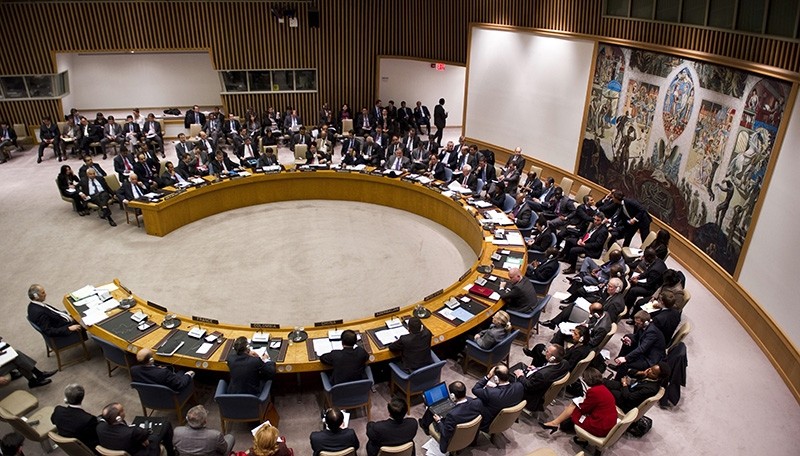 Russia on Tuesday vetoed a U.S.-drafted resolution that would have extended for a year the mandate of a panel investigating who is behind chemical weapons attacks in Syria.

It was the eighth time that Russia has used its veto power at the Security Council to block action targeting its Syrian ally.

The investigation by the United Nations and the Organization for the Prohibition of Chemical Weapons - known as the Joint Investigative Mechanism (JIM) - was unanimously created by the 15-member U.N. Security Council in 2015 and renewed in 2016 for another year.

Its latest report is due Thursday and the mission's mandate is due to expire in mid-November.

China abstained from Tuesday's vote, while Bolivia joined Russia in voting no. Eleven countries voted in favor of the text.

Russia's U.N. Ambassador Vassily Nebenzia tried unsuccessfully to postpone the vote until next month — after the joint body comprising investigators from the U.N. and the chemical weapons watchdog issues a report on Oct. 26 on blame for the April 4th chemical attack in Khan Sheikhoun that killed over 90 people.

Russia's call for a delay needed nine "yes" votes in the 15-member Security Council but got only four — Russia, China, Bolivia and Kazakhstan. It was opposed by eight council members with three abstentions.

Russian Ambassador Vassily Nebenzia said the veto did not mean that the investigation was shut down. He added that Moscow would seek to amend the panel's mandate to ensure it is impartial.

"We did not close the JIM. We simply did not take a decision on extending it today," he said. "We will return to it."

Britain, France and the United States agreed that another vote could be held in the coming weeks to allow the JIM to continue its work.

Nebenzia accused the United States and its partners of seeking a vote on the measure "to show up and dishonor Russia."

"What is taking place today is not very pleasant," said Nebenzia. "It stinks, in fact."

"We are seeing a well-rehearsed spectacle, which only strives to show up and embarrass one country," he added.

In a statement released in Moscow, the Russian foreign ministry insisted that it had the right to study the upcoming report before making an assessment and accused the United States of trying to "impose its position."

A resolution requires nine votes to be adopted at the council, but five countries -- Britain, China, France, Russia and the United States -- can block adoption with their veto power.

The attack in Khan Sheikhoun sparked outrage around the world as photos and video of the aftermath, including quivering children dying on camera, were widely broadcast.

The United States blamed the regime military for the attack and launched a punitive strike days later on the Shayrat air base where it said the attack was launched. The Assad regime has denied using chemical weapons

A fact-finding mission by the chemical weapons watchdog, the Organization for the Prohibition of Chemical Weapons, reported on June 30 that sarin nerve gas was used in the Khan Sheikhoun attack. But the job of determining responsibility was given to the JIM.

Russia has repeatedly accused the United States and its Western allies of rushing to judgment and blaming the Syrian government for sarin use in Khan Sheikhoun. It has also criticized the June 30 report by the fact-finding mission as "very biased."

Haley told reporters last week that Russia wants to see if the JIM report blames the Assad regime for the Khan Sheikhoun attack before deciding on an extension.

"We can't work like that," Haley told reporters. "We can't go and pick and choose who we want to be at fault, who we don't."

Nebenzia strongly objected to her comments, telling the council Tuesday that "we have never said that."