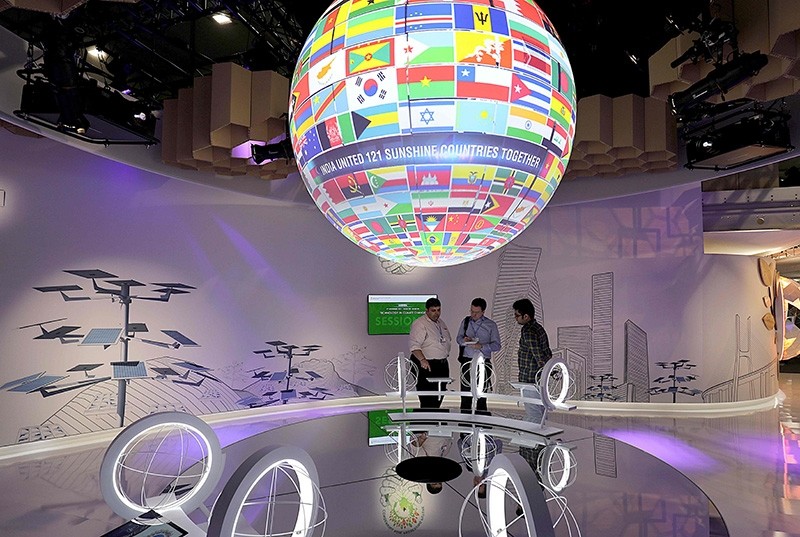 Visitors stand beneath a spinning Globe with the flags of the nations during the COP23 United Nations Climate Change Conference on November 7, 2017 in Bonn, western Germany. (AFP Photo)
by Compiled from Wire Services Nov 07, 2017 12:00 am

U.S. President Donald Trump, who pulled his country out of the 2015 Paris climate change deal, is "for the time being" not invited to a climate change summit due to be held in the French capital in December, an official in President Emmanuel Macron's office said.

"The United States has a bit of a special status for that summit," the official said, adding that guests there will be committed to implementing the 2015 deal.

The U.S. would still be invited to the summit but at a lower level than the president, added the official.

Trump announced his decision to withdraw the U.S. from the historic 2015 Paris Agreement on limiting carbon emissions in June.

The pact calls for capping global warming at "well under" two degrees Celsius (3.6 degrees Fahrenheit) above pre-industrial levels, and 1.5 C if possible.

Around 800 organizations and public stakeholders will be on hand for the December 12 event to be held on Ile Seguin, an island in the Seine River southwest of Paris.

The meeting will follow the 23rd U.N. climate conference (COP23) that opened in Bonn, Germany on Monday.

The Bonn meeting is dealing mainly with technical issues such as ensuring transparency and compliance, the reporting of emissions, and procedures for allocating climate funds.

An aide to French President Emmanuel Macron said the upcoming summit would aim to "build coalitions" involving cities, investment funds and development banks to further the goals of the accord.

"The idea is to show that there is action, that we must accelerate actions and find new sources of financing for very concrete projects," he said, calling the meeting "very complementary" to the COP23.