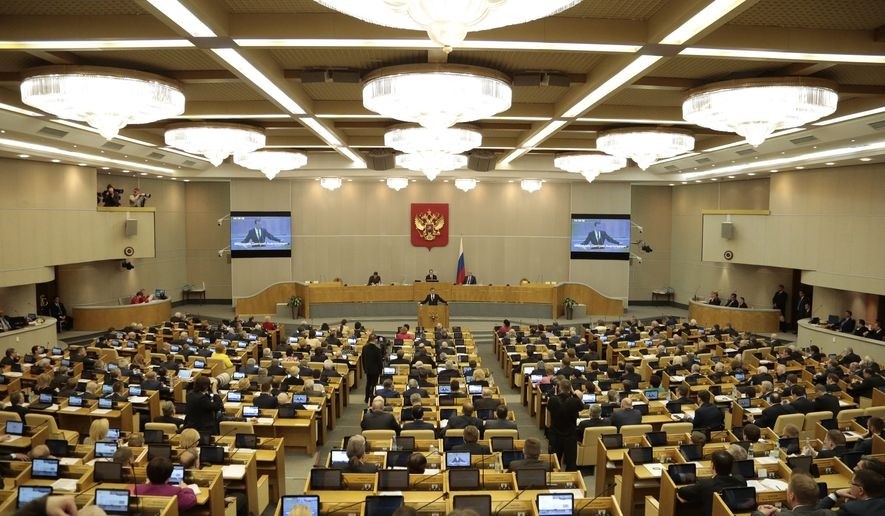 A senior lawmaker says the State Duma could bar U.S. media from accessing the lower chamber of Russian parliament in retaliation for the withdrawal of a Kremlin-funded television station's credentials in the United States.

Olga Savastyanova told Russian news agencies on Friday that she expects the Duma to adopt the ban next week. Foreign correspondents in Russia can currently access the Russian parliament and some government agencies with their press credentials issued by the Russian Foreign Ministry.

"It's a ban on journalists who represent American media, all American media, visiting the State Duma," RIA quoted Savastyanova as saying. She represents the ruling United Russia party, which holds a majority of the seats in the chamber.

IThe ban would be put forward for approval of the chamber, known as the State Duma, on Tuesday or Wednesday, according to RIA.

A committee that governs Capitol Hill access for broadcast journalists on Wednesday withdrew credentials for Kremlin-funded RT after the company complied earlier this month with a U.S. demand that it register under the Foreign Agents Registration Act. Russia has denounced the move as a violation of media freedom.

The Kremlin has pledged to retaliate in kind. At the weekend, Russian President Vladimir Putin signed a law allowing the Russian authorities to designate some foreign media as "foreign agents."

The move to deny U.S. journalists access to the State Duma was a response to a similar move in Washington, RIA quoted Savastyanova as saying.

RT on Wednesday night published a letter from the Executive Committee of the Congressional Radio And Television Correspondents Gallery saying the channel's Congressional press credentials had been withdrawn due to its registration as a foreign agent in the United States.

That means RT's reporters will not be able to have as much access to Congress as other foreign media.