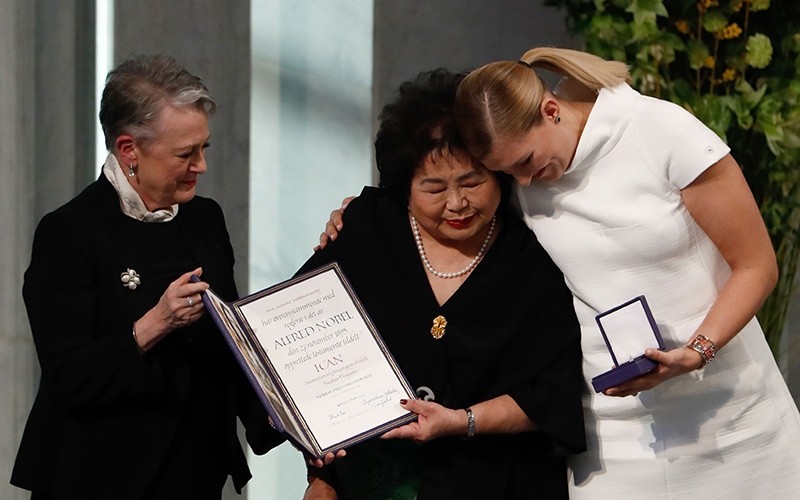 Mankind's destruction caused by a nuclear war is just one "impulsive tantrum away", the winners of the Nobel Peace Prize, the International Campaign to Abolish Nuclear Weapons (ICAN), warned Sunday as the United States and North Korea exchange threats over the nation's nuclear tests.

Tensions on the Korean peninsula have spiraled as Pyongyang has in recent months ramped up its number of missiles and nuclear tests.

"The only rational course of action is to cease living under the conditions where our mutual destruction is only one impulsive tantrum away," Fihn added.

ICAN, a coalition of hundreds of NGOs around the world, has worked for a treaty banning nuclear weapons which was adopted in July by 122 countries.

The text was weakened by the absence of the nine nuclear powers among the signatories.

In an apparent snub of the ICAN-backed treaty, the three western nuclear powers -- the U.S., France and Britain -- broke with tradition by sending second-ranking diplomats rather than their ambassadors to Sunday's ceremony.

Supporters of nuclear weapons argue that they serve as a deterrent for starting a major conflict as it would guarantee mutual destruction for the nations involved.

"They are a madman's gun held permanently to our temple," Fihn said. "These weapons were supposed to keep us free, but they deny us our freedoms."

Berit Reiss-Andersen, chairman of the Norwegian Nobel Committee, said in her lecture during the ceremony that ICAN's "message resonates with millions of people who perceive that the threat of nuclear war is greater than it has been for a long time, not least due to the situation in North Korea".

Senior U.N. envoy Jeffrey Feltman warned Saturday there was a grave risk that a miscalculation could trigger conflict with Pyongyang and urged the reclusive state to keep communication channels open.

Kim and Trump have taunted each other in recent months, with the U.S. President pejoratively dubbing his rival "Little Rocket Man" and a "sick puppy."

"A moment of panic or carelessness, a misconstrued comment or bruised ego could easily lead us unavoidably to the destruction of entire cities," Fihn said.

Several survivors of the Hiroshima and Nagasaki nuclear bombings, which killed more than 220,000 people 72 years ago, attended the ceremony in the Oslo City Hall.

One of them, Setsuko Thurlow, received the Nobel on behalf of ICAN jointly with Fihn.

Speaking to AFP ahead of the ceremony, Thurlow recalled the horrific aftermath of the first atomic bomb in Hiroshima on August 6, 1945, when she was 13 years old.

Thurlow described corpses lying on the ground, the injured and dying calling for help and the survivors looking like "a procession of ghosts."

"The hair was standing up and they were all burned on the skin and their flesh was hanging from their bones," she said.

"Some were carrying their eyeballs. It just was like hell on earth," added the 85-year-old who now lives in Canada and uses a wheelchair.

Although the number of nuclear weapons has dropped since the end of the Cold War, there are still around 15,000 atomic bombs on earth.

"Listen to our testimony. Heed our warning. And know that your actions are consequential," Thurlow said during her speech at the ceremony, referring to the leaders of nuclear-armed nations.