Thousands protest Trump's Jerusalem move at US embassy in Indonesia 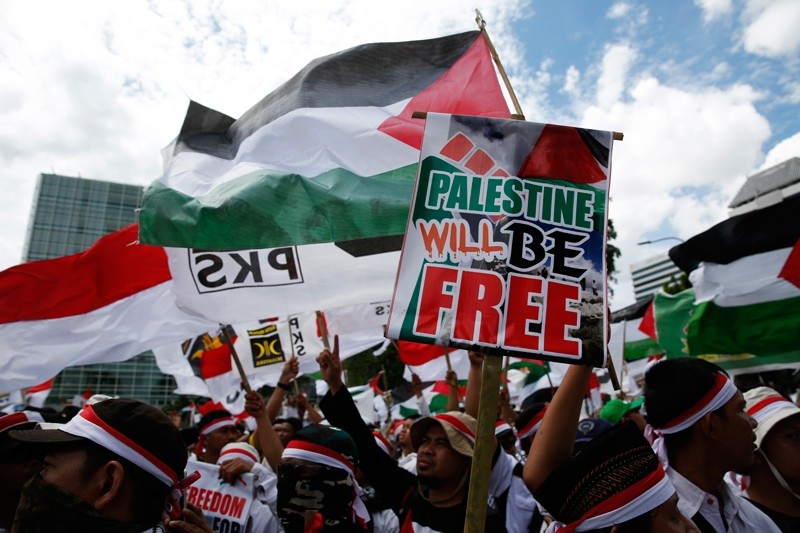 Indonesian Muslim activists hold pro-Palestinian placards during a protest against US President Donald J. Trump's decision to recognize Jerusalem as capital of Israel, outside of the US embassy in Jakarta, Indonesia ( EPA Photo)
by Compiled from Wire Services Dec 10, 2017 12:00 am

About 10,000 Indonesians have rallied outside the U.S. Embassy in Jakarta in support of Palestinians and denouncing President Donald Trump's decision to recognize Jerusalem as Israel's capital.

The protesters are carrying banners reading "US Embassy, Gets Out from Al Quds," ''Free Jerusalem and Palestinians" and "We are with the Palestinians." Al-Quds is the Arabic name for Jerusalem.

Leaders in Indonesia, home to the world's largest Muslim population, have joined a global chorus of condemnation of Trump's announcement, including Western allies who say it is a blow to peace efforts and risks sparking more violence.

Thousands of protesters in Muslim-majority countries in Asia have rallied in recent days to condemn the U.S. move. 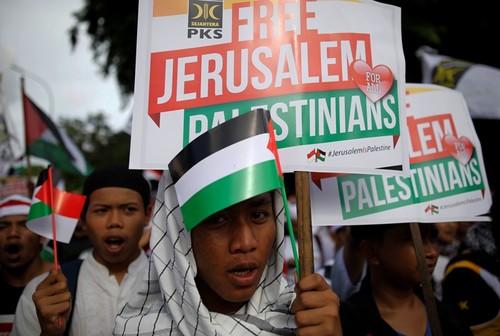 Israel maintains that all of Jerusalem is its capital. Palestinians want East Jerusalem as the capital of a future independent state and say Trump's move has left them completely sidelined.

Palestinian people were among the first to recognise Indonesia's independence in 1945, Sohibul Iman, president of the controversial Islamist opposition Prosperous Justice Party which organised the rally, told protesters.

Indonesia should be more proactive in "urging the Organisation of Islamic Conference (OIC) member states and U.N. Security Council and the international community to respond immediately with more decisive and concrete political and diplomatic actions in saving the Palestinians from the Israeli occupation and its collaborator, the United States of America," Iman said.

"Indonesia as the world's largest Muslim country has the largest responsibility toward the independence of Palestine and the management of Jerusalem," he told reporters, adding that he hoped Indonesia would take a leading role within the OIC on the matter.

The decision was "a major disaster for the Palestinian people, while the Palestinian's own rights have been taken away for a long time," said Septi, a student at the rally.

Violence erupted for a third day in Gaza on Saturday in response to Trump's decision, which overturned decades of U.S. policy towards the Middle East.