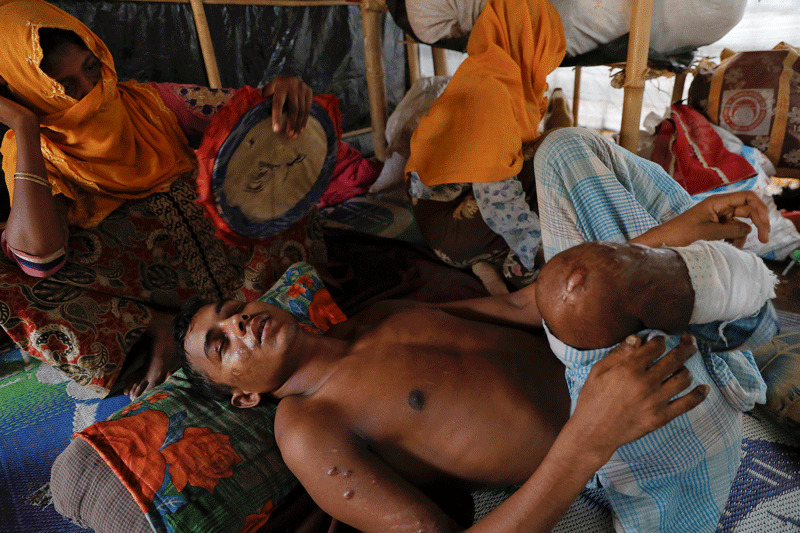 27-year-old Rohingya refugee and landmine victim, is comforted by his mother as he suffers in pain at his family's shelter at Kutupalong refugee camp near Cox's Bazar, Bangladesh (Reuters Photo)
by Dec 14, 2017 12:00 am

A record number of children were reported killed or hurt by landmines and other explosives last year, with a handful of conflicts contributing to a "horrific" toll for the second year running, experts said on Thursday.

The annual Landmine Monitor report recorded 8,605 casualties, including 2,089 deaths in 2016, the second highest figure since 1999 when it began gathering data.

The spike was fuelled by violence in Afghanistan, Ukraine, Yemen and Libya.

About three-quarters of known casualties were civilians, including more than 1,000 children who were injured and nearly 500 who were killed, the report said.

"A few intense conflicts, where utter disregard for civilian safety persists, have resulted in very high numbers of mine casualties for the second year in a row," said co-editor Loren Persi.

He described the spike as "alarming", adding that the true number of victims would be significantly higher due to gaps in data from several countries, particularly Syria and Iraq.

The toll - more than twice that recorded in 2013 - includes deaths from improvised explosive devices, unexploded cluster munitions and other remnants of war, as well as from mines.

Earlier this year, Britain's Prince Harry called for greater global efforts to rid the world of landmines by 2025, two decades after his mother, Princess Diana, walked through a minefield in Angola to highlight the plight of victims.

Production and use of landmines has fallen since the Mine Ban Treaty - which prohibits their use, stockpiling and transfer - was adopted in 1997.

But campaigners said Daesh terrorist group forces in Iraq and Syria produced improvised mines on an "industrial scale" this year.

Twenty years ago, countries created the international Mine Ban Treaty, which 162 governments have signed.

Countries that have not joined include Syria, Myanmar, the United States, Russia and China.

Experts told a teleconference briefing there was evidence earlier this year that Myanmar had laid mines along border areas where Rohingya refugees were crossing into Bangladesh, and that there had been reports of women and children killed.

Algeria and Mozambique both declared themselves free of landmines in 2017, but 61 countries and disputed regions are still known to be contaminated.

Just over half are parties to the Mine Ban Treaty, which calls for clearance of contamination within 10 years.

But experts said only four countries appeared set to meet their deadlines.

"States need to stay committed to reach the goal of a mine-free world by 2025."