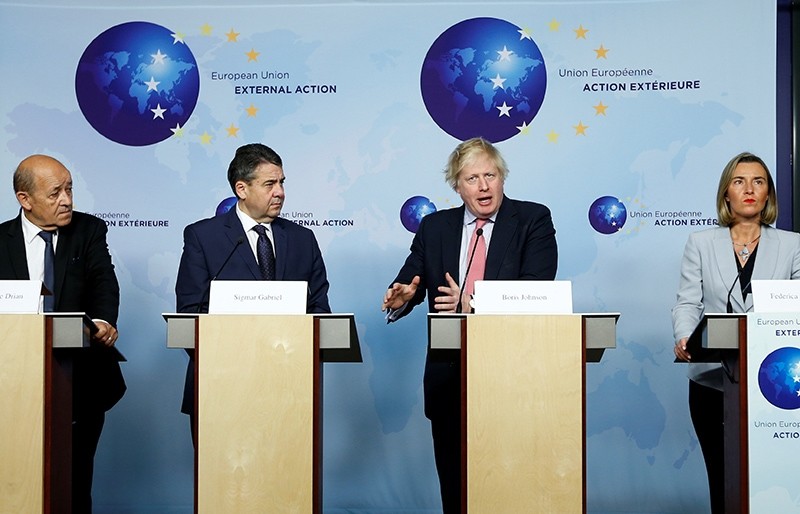 European Union foreign ministers on Thursday said a key agreement curbing Iran's nuclear ambitions must be preserved as U.S. President Donald Trump weighs whether to pull out of the pact.

His remarks came ahead of talks in Brussels between ministers from the U.K., France and Germany and their Iranian counterpart Javad Zarif.

German Foreign Minister Sigmar Gabriel said the EU wants to preserve the deal "because it is in our interest not to develop or to see that nuclear weapons are developed in Iran."

"The deal is working, it is delivering on its main goal which means keeping the Iranian nuclear program in check and under close surveillance," Mogherini said.

"It is essential that all parties should continue to abide by the deal," French Foreign Minister Yves Le Drian added, calling on the U.S. to respect it too.

Under the accord, Iran slowed its nuclear program in exchange for an easing of international economic sanctions. Trump has said he would consider scrapping the deal.

Trump's October decision not to certify Iran's compliance with the nuclear deal has put Washington at odds with all other signatories of the accord - Britain, France, Germany, Russia, China and the EU.

European allies have warned of a split with the U.S. over the nuclear agreement and say if Washington reimposes sanctions on Iran, the pact could fall apart.

Trump must decide by mid-January whether to continue waiving U.S. sanctions on Iran's oil exports under the terms of the pact. The U.S. State Department said Tuesday the Trump administration was expected to decide on Friday.

The decision comes as Iran's government deals with protests over economic hardships and corruption that are linked to frustration among younger Iranians who hoped to see more benefits from the lifting of sanctions.

Iran, which on Monday warned the world to get ready for Washington abandoning the deal, has said if the U.S. walks away from the agreement it is ready to give an "appropriate and heavy response."

"The United States must understand the unity of the international community over the nuclear deal and change their position as a result," Zarif said, urging world powers to "resist the hostile actions" of the Trump administration.

The International Atomic Energy Agency (IAEA) has repeatedly said Iran is keeping up its side of the agreement, most recently in November. After talks in Moscow on Wednesday Zarif tweeted a warning.

"Everyone agrees it is imperative that ALL live up to their obligations under JCPOA. IAEA has verified Iran's full compliance, but continuation will depend on full U.S. compliance," he wrote. JCPOA is the official name for the deal.