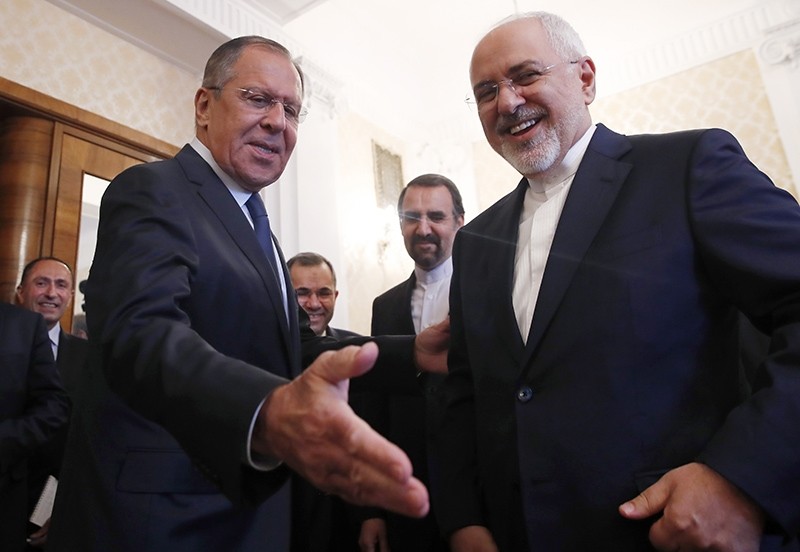 Russian Foreign Minister Sergei Lavrov (L) invites his Iranian counterpart Mohammad Javad Zarif (R) to have a seat during their meeting in Moscow, Russia, May 14, 2018. (EPA Photo)
by Daily Sabah with Agencies May 14, 2018 12:00 am

Lavrov and his Iranian counterpart Mohammad Javad Zarif are meeting in Moscow, as Zarif seeks "assurances" from the backers of the deal after the U.S. pulled out.

"As far as we are aware, the European troika, China, Iran and Russia have announced their plans to comply with the JCPOA," Lavrov said Monday.

Russia is trying to keep the landmark 2015 accord alive in the wake of U.S. President Donald Trump's decision, pushing it into rare cooperation with Europe.

"The final aim of these negotiations is to seek assurances that the interests of the Iranian nation will be defended," Zarif said at the start of a meeting with Lavrov.

After the talks, Zarif praised the "excellent cooperation" between Moscow and Tehran and said Lavrov had promised him to "defend and keep the agreement."

Lavrov meanwhile said Russia and Europe should "jointly defend their legal interests" in terms of the deal.

"The Russian Federation and other participants of this deal – China, the Europeans – also have legitimate interests that are enshrined in this agreement and approved by the U.N. Security Council," Lavrov said. "Thus we need to collaboratively insist on the lawful interests of each one of us."

Zarif's diplomatic tour took him to Beijing at the weekend and will see him visit Brussels later in the week, as the international backers of the agreement scramble to save it.

After meeting his Chinese counterpart on Sunday, Zarif said he was hopeful of forging a "clear future design" for the accord.

Erdoğan has repeatedly voiced his concern over the U.S. move, saying that for Turkey, "any action that threatens peace in the region is dangerous."

"Continuity is essential in terms of agreements between states," Erdoğan told the BBC on Sunday.

Trump's move to ditch the nuclear deal has infuriated Washington's allies in Europe as well as China and Russia, who cooperated to reach the deal.

"[European] cooperation with Russia, which until recently seemed impossible because of the Skripal [spy poisoning] case, with the expulsion of diplomats and the reduction of contact, is now receiving a fresh boost," consultant Andrei Baklitski of the PIR Center NGO said.

"The Europeans, after the withdrawal of the U.S. from the deal, have found themselves forced to save the Joint Cooperative Plan of Action themselves," he told AFP.

Moscow would have to play a key role in ensuring Tehran does not resume its nuclear program, he added.

Germany's Merkel is set to visit Russia and meet Putin for a working visit in the Black Sea resort of Sochi on Friday, while French President Emmanuel Macron will be in Saint Petersburg later in the month for an economic forum.

Iran has said it is preparing to resume "industrial-scale" uranium enrichment "without any restrictions" unless Europe can provide solid guarantees that it can maintain trade ties despite renewed U.S. sanctions.

Iran on Sunday gave the European Union 60 days to guarantee the continued implementation of the nuclear deal after the U.S. decision to leave.

The EU trio of Germany, France and Britain have asked for a limit of 90 days, sources in Tehran have said. The issue will likely be a focus of discussions between the Iranian and European foreign ministers in Brussels.

After long negotiations, Iran had agreed in July 2015 to freeze its nuclear program in return for the lifting of punishing international sanctions.

The deal was negotiated between Iran and the five permanent members of the U.N. Security Council -- Britain, China, France, Russia and the United States -- plus Germany.

But while Pompeo talked up the prospect of renewed coordination with America's allies, another top aide reminded Europe its companies could face sanctions if they continue to do business with the Middle Eastern power.

In a meeting in Beijing over the weekend, Chinese Foreign Minister Wang Yi promised Zarif that Beijing would take "continue to work to maintain the deal."

Russia and Iran once had difficult relations but have seen ties improve since the end of the Cold War.

The countries sought to strengthen their business ties long before the 2015 agreement, despite international sanctions in place.

Analysts have suggested Russia could benefit economically from the U.S. pullout, as it is less exposed to the consequences of renewed sanctions than Europe.